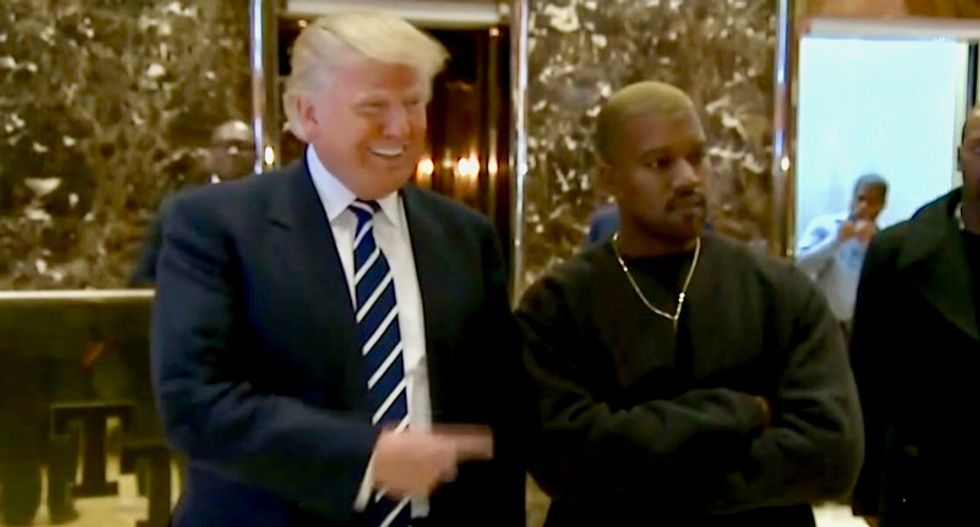 West, re-emerging from a year-long absence as he promotes upcoming albums and his fashion line, on Wednesday tweeted his "love" of "my brother" Trump and appeared wearing one of the president's signature "Make America Great Again" caps.

But one rare voice of support was Chance the Rapper, a fast-rising star from West's hometown of Chicago who tweeted, "Black people don't have to be Democrats" and predicted that the next US president will be an independent.

Trump, unaccustomed to defenders in the celebrity world, on Friday thanked Chance on Twitter and said that "eyes are being opened for the first time in decades" as he touted low unemployment rates among minorities.

Chance, whose father is a Democratic operative in Chicago who worked for future president Barack Obama, on Friday apologized and said he only wanted to support West, whom he called such a mentor that he felt like family.

"I'd never support anyone who has made a career out of hatred, racism and discrimination," Chance tweeted in reference to Trump.

Chance said his comments were ill-timed but that Chicago has had "generations of Democratic officials with no investment or regard for black schools, neighborhood(s) or black lives."

"We have to talk honestly about what is happening and has been happening in this country and we have to challenge those who are responsible, as well as those who are giving them a pass," said Chance, whose charity last year pledged $2.2 million for arts programs in Chicago public schools.

West met Trump in 2016 after the rapper cut short a tour following a breakdown. But West has said little about why he admires the real estate tycoon, who came to political prominence promoting unfounded conspiracy theories about Obama's place of birth.

West tweeted on Friday: "I haven't done enough research on conservatives to call myself or be called one. I'm just refusing to be enslaved by monolithic thought."