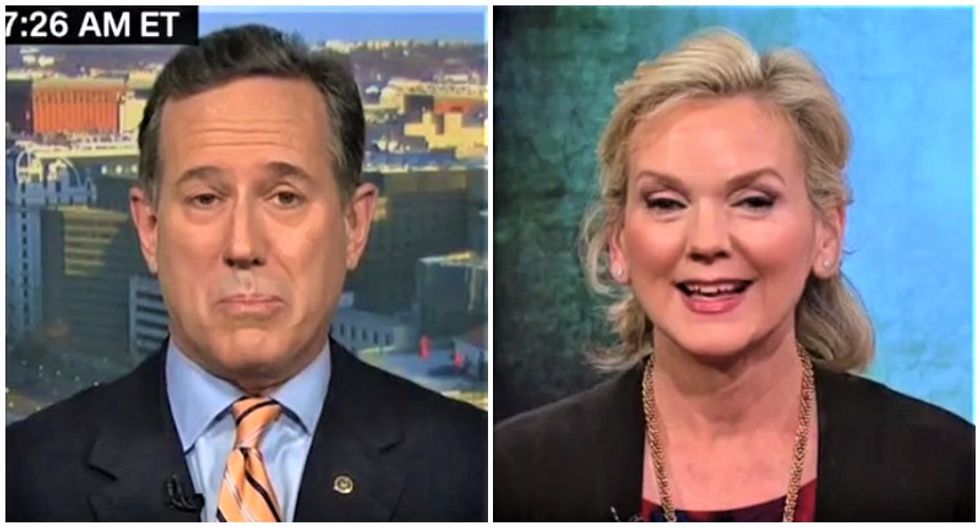 During the discussion of Pruitt's numerous ethics controversies, Santorum said that Pruitt needed to fly first class instead of coach because he needed to avoid angry environmentalists who had purportedly been heckling him.

"Scott Pruitt has been under enormous threats, more than any other person in the administration other than the president himself," he said. "Death threats. There are security concerns. He says he was harassed a lot when he was flying in coach."

At this point, host Alisyn Camerota turned to Granholm and asked her if there was "a force field in first class" that would prevent mean people from harassing Pruitt -- and Granholm cracked up laughing.

"No," she chuckled. "This guy has more ethics problems than all of these others."

Camerota then read off a list of all the ethics controversies surrounding Pruitt.

"He rented a condo from the wife of a D.C. lobbyist -- that alone might raise eyebrows," she said. "He has it under market at $50 a night. He's given raises to two people he knows for a long time, they call them friends. And they are substantial raises. He spent tens of thousands on luxury travel, including lots of first class tickets."

Granholm responded by saying Pruitt's behavior is a classic case of "swampy corruption."