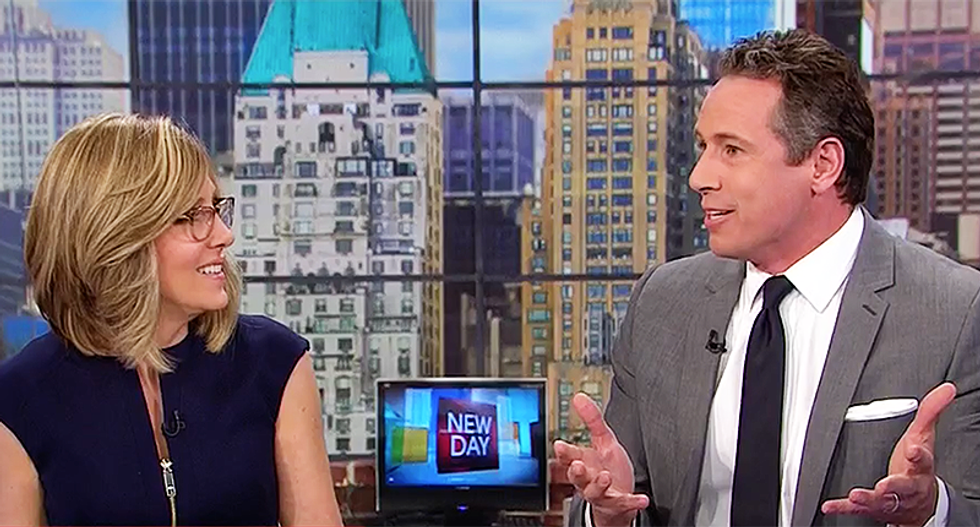 During the Monday "New Day," Cuomo and co-host Alisyn Camerota noted that Trump sent 24 tweets over the weekend, in his largest tweet storm yet.

During a discussion with Maggie Haberman, the New York Times reporter cited Trump's tweets about what is assumed to be Sam Nunberg, who he called "a drunk/drugged up loser who hates Michael" Cohen.

"This is how he really feels," Haberman said.

"This is a man who has pledged to take the opioid crisis real, to treat addiction in a way no president has before," Cuomo said. "We know he has to be talking about Sam Nunberg. Nobody else fits the description of being anyone who would be connected to any kind of problems with addiction except for him and again, maybe it's speculation, maybe it isn't. But that's true."

Cuomo wondered if Trump should be held to account for calling someone a drunk or drugged up when he's supposed to be sensitive to those with addiction.

"Should he be held to account, the president of the United States, for referring to somebody as a drugged up drunk when he says he wants to give attention to addiction, treat these people with respect, treat them as sick, help with the problem," Cuomo asked. "Because he identified the problem he is the problem? Stigma is a big part of the problem in change how long we deal with it. I know all the other stuff is great political intrigue, but should we focus on that?"

Haberman said that it was absolutely essential to the conversation, because the opioid crisis was a huge part of the general election and he appeared to be compassionate about it.

"What he -- about addicts, he had a brother who died of alcoholism and he considers addiction to be weak," she continued. "Whatever he says to people when he is either dealing with people who have lost children, as he did recently in New Hampshire, to opioids, or when he is trying to sound he is focused on this crisis that is very revealing to say what he said."

The group then moved to talk about Trump's attacks on James Comey and special counsel Robert Mueller.

"Here's another tweet: 'James Comey illegally leaked classified document to the press to generate a special counsel. Therefore, the counsel was established based on an illegal act,'" Camerota read aloud. "Really, does anybody know what that means?"

"I don't know that he knows what that means," Haberman said, in apparent seriousness. "Based on that tweet, we don't actually know what that Comey did was 'illegal.' We do not know whether there was classified information that should have -- that was retroactively classified. That is being looked at. A difference between something being looked at and done the same way a big difference between a country saying they're going to denuclearize and actually saying that."

"What's impressive not that he once again -- how can you not know how to special counsel -- with special counsel when you've written it so many times, Mr. President?" Cuomo asked. "Your words matter. At this point how many times has he written about Jim Comey and the special counsel. Still misspells it? What I'm saying is, somebody who has the best information in the world about all of this stuff, right? We don't even come close, he has is always this. He is always going off what he hears in the media about this."

At the same time, Trump's dogged attacks on Comey are only doing more to fuel his book tour.