CNN’s Jim Acosta fires back at Trump’s 2020 campaign director for attacking his reporting: ‘Look up the First Amendment’ 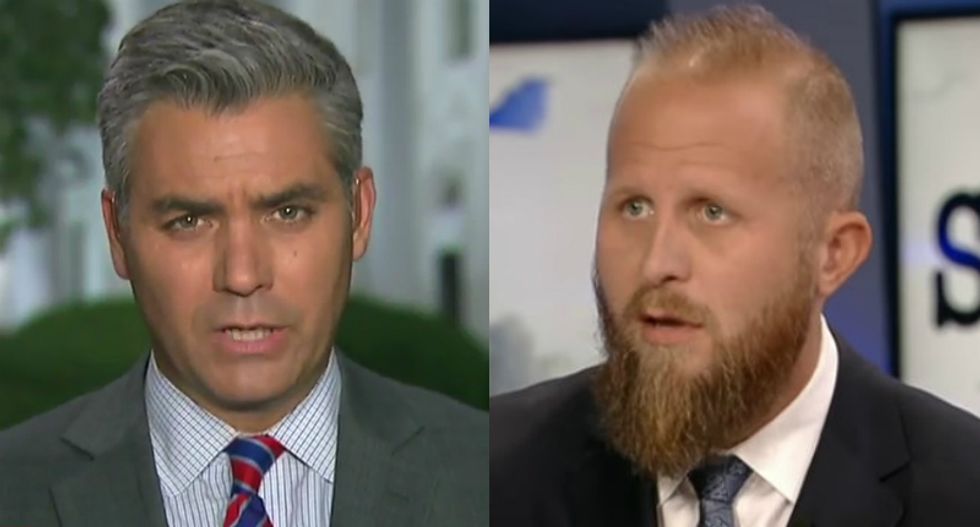 After President Donald Trump's 2020 campaign manager called on CNN's Jim Acosta to be suspended for "breaking protocol," the reporter clapped back with the Constitution.

"Maybe it is time for Jim Acosta to get a suspension for breaking protocol," Trump 2020 campaign manager Brad Parscale tweeted Monday, linking to a right-wing blog article that claimed the White House correspondent shouted at the president while he was entertaining children during Eater celebrations. Parscale added that the reporter is embarrassing himself and his network and that CNN should "pull his credentials for each incident."

Maybe it is time for Jim Acosta to get a suspension for breaking protocol. He continues to embarrass himself and… https://t.co/dOkQ1oSRAB
— Brad Parscale (@Brad Parscale)1522689405.0

Quoting the tweet, Acosta responded that he was just doing his job that is "protected by the First Amendment of The Constitution."

"You might want to give it a read," he added.

Just doing my job.. which is protected by the First Amendment of The Constitution. You might want to give it a read. https://t.co/lbUZmxGPJO
— Jim Acosta (@Jim Acosta)1522695942.0

According to USA Today, which cited the White House press pool reports, Acosta asked the president and the First Lady "what about the DACA kids?" as they were coloring at a table with Barron Trump and other children. Trump responded that the Democrats "let them down," to which the reporter followed up asking if the president himself had killed it. He received no response, per pool reports.