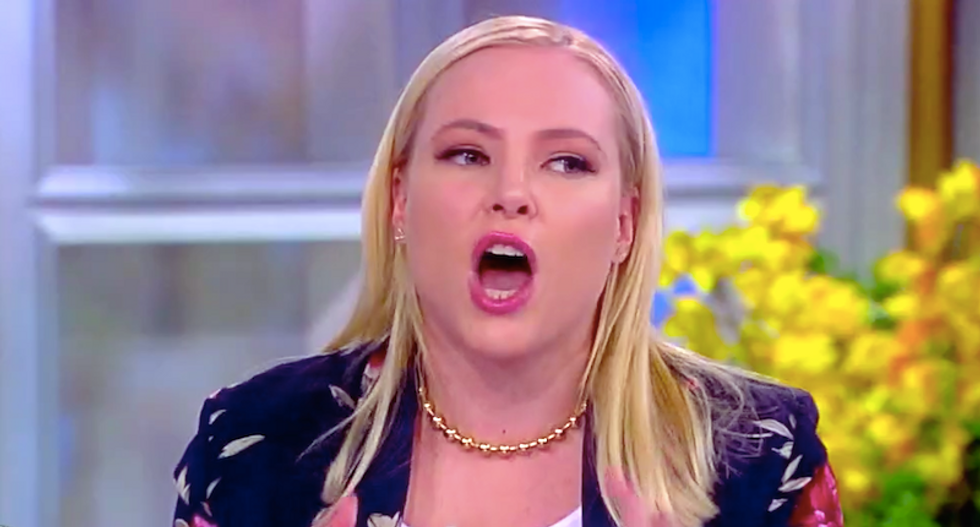 "The View" co-host Meghan McCain warned audience members they would be sorry for cheering the departure of House Speaker Paul Ryan -- a man she greatly admires -- from the U.S. Congress.

Ryan announced his retirement shortly before Wednesday's program began, and the conservative McCain complained when the studio audience loudly celebrated the news.

"The cheering kind of surprises me a little bit because Paul Ryan is a politician of an era gone by," McCain said. "He was one of the most powerful congressmen between 2009 and 2016, before Trumpism sort of completely took over. He was a really classic conservative, and this party is the party of Trump now. People like me who are old-school conservatives, we're really on our way out -- and it makes me really sad."

McCain said she and her husband, conservative commentator Ben Domenech, agreed Paul was almost too good for today's Washington, D.C.

"My husband, I was texting him about it, and he said, 'He committed the worst sin -- he was serious, polite and nice,'" McCain said. "'That's not what people want right now.'"

McCain said she believes Ryan is tired of being asked about President Donald Trump's daily scandals, although the House Speaker rarely comments on them.

"He gave a press conference saying he wants to spend time with his family -- I believe him to a point," she said. "I believe he doesn't want to deal with this anymore, and he doesn't want to go home to his constituents in Wisconsin and try and explain some of the tweeting and the more incendiary things that President Trump is doing right now."

McCain said Trump and his allies were chasing top Republicans out of Washington, and she warned they would be sorry for applauding their departure.

"We're having Trey Gowdy on tomorrow -- this is the bloodletting of classic conservatives," she said. "The people that are cheering. Do you know what comes in its place? Trumpism, and I assume if you don't like Paul Ryan, you probably hate Trump more."

McCain cautioned the audience that Ryan and other his former running mate were probably the best that Republicans had to offer at this point.

"So maybe don't cheer when people like Paul Ryan and Mitt Romney and Trey Gowdy, and people like Ben Sasse, who are, thank god, still in office, or maybe on their way out, because I assure you -- what's in its place you will like a lot less."

The segment devolved into shouting match after McCain's co-hosts called Ryan an "enabler" of Trump's assault on democratic institutions.

Co-host Joy Behar said Ryan got what he wanted -- tax cuts for the rich -- by allowing Trump to do as he pleased, and McCain erupted.

"What do you want? If Paul Ryan isn't good enough," McCain shouted, and Beshar said she wanted him out of the House. "But that's not logical. We live in a democracy, we should want two healthy parties. They are against each other, but if Paul Ryan is the greatest sin, this is how we got Trump because if Paul Ryan and Mitt Romney and people like this are the worst politicians, then you deserve Trump. He was trying to fight for democracy and ideals. Now I have no idea."