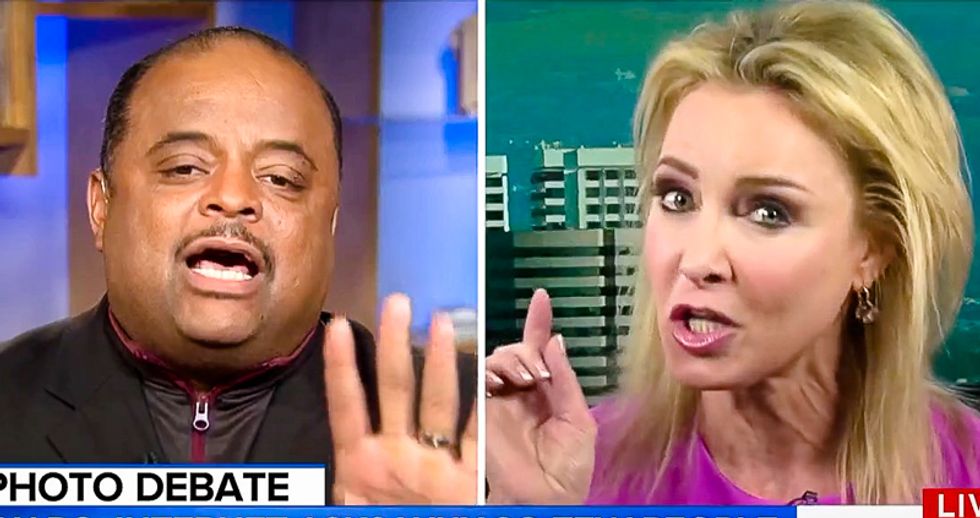 TV One host Roland Martin on Sunday called out Jennifer Grossman, a libertarian former speechwriter for George W. Bush, after she tried to explain the words of Dr. Martin Luther King, Jr. to him.

During a panel discussion on MSNBC, Grossman observed that there was a lack of investment in "crime-ridden" black communities.

"Is it because of white racism or is it because the crime rate is too high?" she asked, drawing a laugh from Martin. "When are we going to get that crime rate down?"

MSNBC host Alex Witt connected the issue to Washington, and noted that nearly all of this year's White House interns are white.

"The most important thing is the content of our character," Grossman insisted. "So whether or not you have racial diversity in that intern class, I would argue probably you have a lot more diversity in terms of political viewpoints because President Trump's election has really stirred things up."

"I'm a little concerned about creating intern classes where everybody looks different but thinks the same," she warned.

"I will quote him!" Grossman shouted with her finger in the air. "Do you want to have more of a debate on race? You're kind of politically-correct bullying of people on racism is not going to work. So, I will quote Dr. Martin Luther King every single day. And you won't stop me."

After she concluded her objection, Martin continued: "People love to quote the bottom of the speech and want to ignore the top of that speech, when Dr. King said America gave African-Americans a check with insufficient funds. He talked about combatting police brutality, in that speech where he talked about giving black folks the right to vote. So that speech is an extensive speech."

Martin reminded Grossman that the U.S. will be a majority-minority country in the next 30 years.

"If you have [an intern] class that's absent of minority people, these are the folks who will be leaders in the next 10, 15, 20 years," he stated. "You better have a diversified class to lead a diversified America. Otherwise, you are going to have the same problems."

"Talk to some black Republicans," Martin advised the White House. "It's not that hard to find them. You've got to have some eyes that are open and ears that are open to receive a diversified White House intern class."

Grossman tried to defend Trump by saying that he received a "higher percentage of the black vote" than 2012 GOP nominee Mitt Romney. But Martin shut her down.

"Actually, he didn't," Martin said. "You are wrong. And facts matter. Ninety-four percent of black women voted for Hillary Clinton. And there was a nine point gap between black men and black women, the exact same nine point gap that Mitt Romney had with Barack Obama. So actually on that point, you're wrong."

"No, no," Grossman parried.

"Jennifer, I kind of know black voters better than you do," Martin quipped.