Ex-White House advisor compares Trump to authoritarian leader: 'It could lead to the death of democracy' 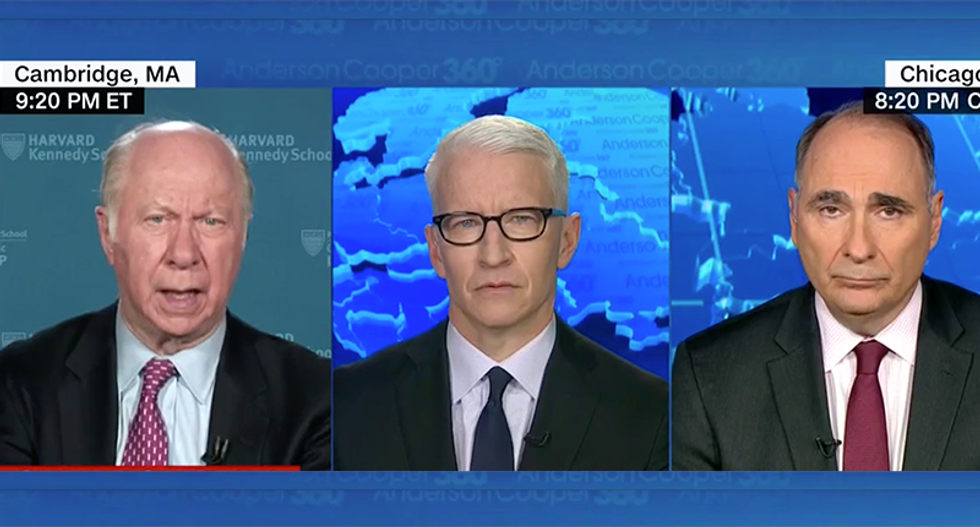 Former White House advisor David Gergen warned of the end of democracy if President Donald Trump continues to lie while whipping his power all over America's laws.

"He's as dismissive of truth as he is ethics," said the advisor to multiple presidents. "We could go on and on with this. One thing was striking this week was a story in yesterday's front page this the New York Times about the leader of Turkey who is giving speeches like this every day, two or three on national television. He pays no attention to facts. He maintains about 40 percent approval rating. Guess who else has about 40 percent: Donald Trump. It's a device that works up to a point. I'm sad to say it can lead to the diminishment of democracy if not its death."

Host Anderson Cooper followed up asking if Gergen "really believes" it could lead to the end.

"This book that's out now called How Democracies Die is worth reading. It's short and makes compelling points about how many countries have democracies have become authoritarian countries and it's happened again and again. In the last 20 years or so it's happened again and again when extremists come to office and carry their countries in that direction. When you don't have the kind of restraint that a democracy need you can erode it badly. I think it's becoming a threat. We're not there by any means but it is a threat. If we had this president and a couple more like him, I think we would be very close."

Former advisor to Barack Obama, David Axelrod, noted that he too is "deply concerned about democracy," not merely because of Trump's behavior but the ways in which he is degrading democratic institutions.