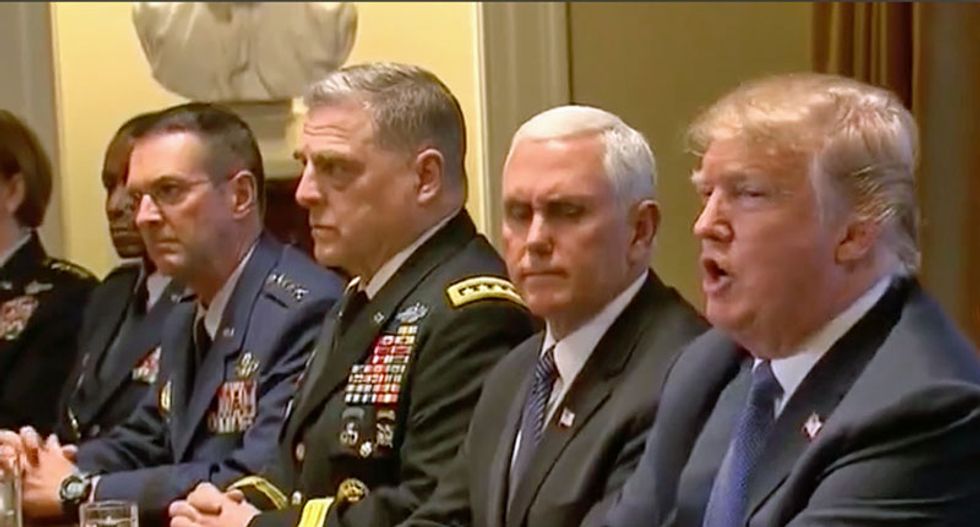 The Secretary of Defense and Joint Chiefs of Staff were placed in an "extraordinarily uncomfortable" position on Monday when President Donald Trump used a White House meeting to claim that America is under attack because of special counsel Robert Mueller's investigation.

"During a meeting with his military leaders and national security leaders when President Trump addressed his grievances against Jeff Sessions and Rosenstein and special prosecutor Mueller over the raid on the office, home and hotel of his personal attorney," anchor Jake Tapper reminded. "What are folks in the Pentagon telling you about the mood in the room among these national security officials and generals?"

"You only have to look at that video, everyone is saying it was very uncomfortable," CNN's Barbara Starr noted. "You see several general officers there, four stars, just staring and keeping their faces expressionless or staring down."

"They are in a room with their commander-in-chief talking about an attack on the country, but the attack is actually Mr. Trump's personal political problems of course," she continued. "These men and women are charged with defending the country and they are listening to what is essentially a political statement by the president."

"It is unprecedented in terms of putting them in an uncomfortable situation, politicizing the military, there is no question," Starr concluded. "It was an extraordinary moment, extraordinarily uncomfortable for the Secretary of Defense, the chairman of the Joint Chiefs, and the chiefs, and all of the major commanders, Jake."