French museum's collection mostly fake, but is it the only one? 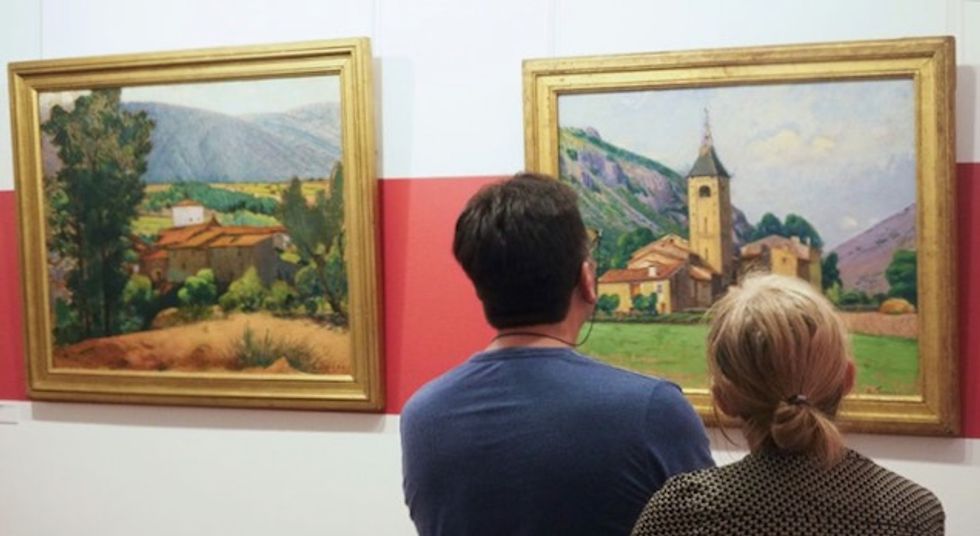 A museum dedicated to French painter Etienne Terrus, in Elne, southern France, has reopened after 60 percent of the paintings were found to be forgeries AFP / RAYMOND ROIG

Over decades, the small museum of Elne in southern France built up a collection of works by local painter Etienne Terrus, mostly oil and watercolours of the region's distinctive landscapes and buildings.

But what was once a source of pride has turned to embarrassment after 60 percent were found to be fakes, providing a lesson about the dangers of buying art without expert skills and the ubiquity of counterfeit canvases.

"Etienne Terrus was Elne's great painter. He was part of the community, he was our painter," lamented mayor Yves Barniol on Friday as he reopened the museum and its exhibition of Terrus paintings -- minus the forgeries.

"Knowing that people have visited the museum and seen a collection most of which is fake, that's bad. It's a catastrophe for the municipality," he added.

Terrus (1857-1922) was born and died in Elne near the city of Perpignan where he painted the sun-baked Mediterranean coastline as well as the misty foothills of the Pyrenees mountains and local red-tiled homes.

While once a friend of Henri Matisse, Terrus never reached the heights of fame achieved by his contemporary, but he earned a following in art circles and regionally with his Impressionist- and Fauvist-influenced production.

The Terrus Museum in Elne began collecting his work in the 1990s and went on a spending splurge over the last five years, acquiring 80 new canvases often thanks to local fund-raising drives.

Devastated locals who helped with the effort now regret being so naive, having handed over tens of thousands of euros to local art dealers and private collectors.

But art-testing expert Yan Walther says fake art being exhibited publicly is a problem worldwide and the case of Elne, though extreme, is not unique.

"The fact that there are fakes and misattributed works in museum collections is something absolutely clear and nobody with an understanding of the field has any illusions about this," Walther told AFP.

"There are misattributed works in the Louvre (in Paris) in the National Gallery (in London), all museums in the world, but it is not in a proportion like 60 percent," he added.

A state museum in the Belgian city of Ghent was accused of exhibiting fakes in January after it put 26 works supposedly by Russian avant-garde artists such as Kazimir Malevich and Wassily Kandinsky on display.

Many experts questioned how the paintings -- the private collection of Russian businessman Igor Toporovski -- could have been amassed in secret and the museum had to cancel the show amid a police investigation.

SGS mostly tests high-end paintings worth between 50,000 and sometimes tens of millions of euros and Walther says on average a staggering 70-90 percent are found to be fake or misattributed.

Misattribution can mean, for example, that a painting was produced by the workshop or assistant to an artist.

"When you acquire real estate or a car, there are a certain number of steps everyone would take: a technical assessment, background checks on the seller," he said.

"For art work, very strangely it is still not in people's minds. You can buy a an artwork for two million dollars and people hardly check anything. But it is starting to change."

The fraud in Elne was discovered by local art historian Eric Forcada who said he had seen the problems immediately, with some of the paintings crude counterfeits.

"On one painting, the ink signature was wiped away when I passed my white glove over it," he said.

In another painting, there was a building that was completed in the 1950s -- 30 years after Terrus's death -- while some of the canvases did not match those used by the original painter.

Forcada alerted the region's top cultural expert and requested a meeting of a panel of experts to confirm his findings.

A police investigation is now set to focus on local art dealers who were the source of many of the paintings.

"The whole of the local art market is rotten, from the unofficial street vendors who pitch to local private collectors up to the art dealers and the auction houses," Forcada said.