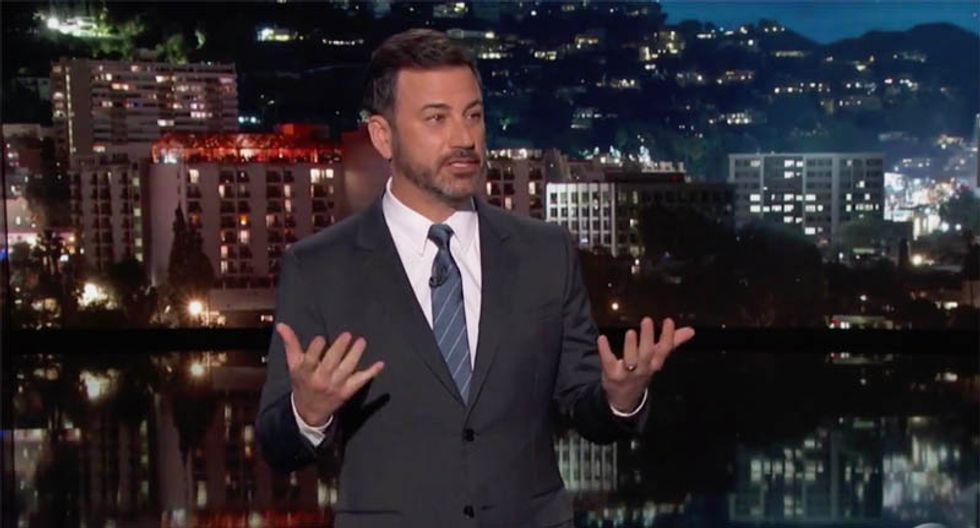 Jimmy Kimmel couldn't help but notice that there was something a little "different" about this year's White House Easter Egg Roll.

“Trump heard ‘egg roll’ and promised to make the Chinese pay for it,” he joked. “It was a fun day for the president. He got to eat chocolate. He even met a nice kid named Barron who he really liked.”

But it was first lady Melania Trump that Kimmel was keeping his eye on. As the official host, the first lady was on hand for one of her rare appearances.

“She worked so hard on this event,” President Donald Trump said in his rambling remarks to the children and families.

“Not a chance she did one thing to help set that up,” Kimmel said. “She didn’t dye eggs. The only thing she’s been working on is an escape tunnel.”

Each year, the first lady and other members of the cabinet read stories to children attending the event. Kimmel played a clip of Mrs. Trump reading a children's book and noted her accent means his sidekick, Guillermo "could be first lady of the United States."

“Hey, I love that Vice President Pence just released the children’s book about a bunny,” Kimmel said, speaking of politicians reading children's book. Pence's daughter Charlotte penned a book about her pet Marlon Bundo. “Did they read that to the kids? No. They went with ‘dis and dat’ instead.”

Kimmel also noted that the president signed a proclamation declaring "the month of April to be National Sexual Assault Awareness and Prevention Month. At this point he’s just messing with us, right?”