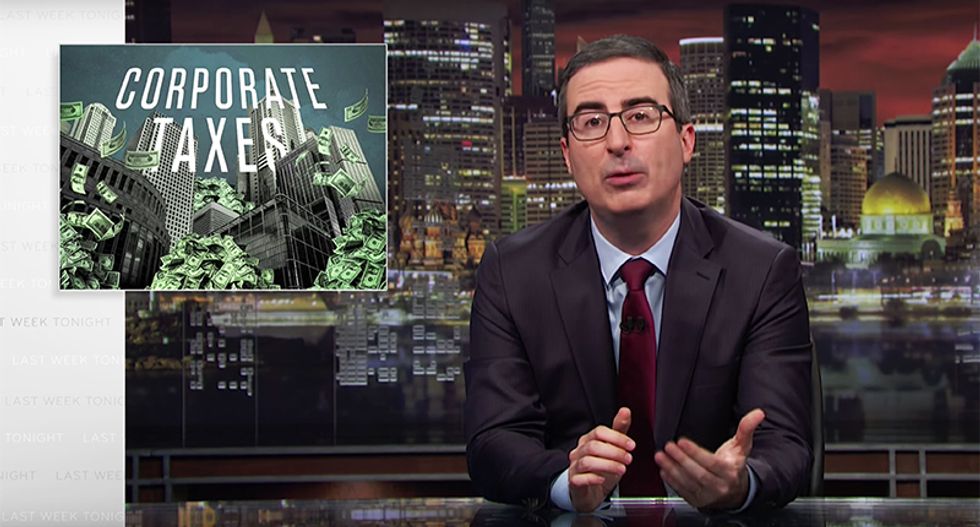 Given that Monday is officially “Tax Day," HBO's John Oliver decided to blow the lid off of the disturbing ways in which Republican leaders have created so many breaks corporations are driving cruise ships through the loopholes.

It's hardly the most exciting topic in the world, but it's one that will infuriate those Americans who actually pay their taxes year after year. It will be a shock for some, but the GOP's tax law was not the first time corporations were able to take advantage of to pay as little in taxes as possible.

Oliver called taxes a kind of desperation for funding for the United States something like "the government's GoFundMe page." He wanted to follow rapper Cardi B's call to understand what people pay and how the government uses the taxes.

One of his examples was Google, which allegedly funnels money around from Ireland, to the Netherlands and ultimately to Bermuda, which has a 0 percent tax rate. Oliver called it “Double Irish with a Dutch Sandwich." He noted that it's something that “sounds like a disgusting sex act or an even more disgusting Waffle House menu item.”

Apple is another example of a company that has gone to impressive lengths to avoid paying taxes. They kept $269 billion offshore in Ireland, then moved it to another part of the British Isles.

Oliver called out other corporate headquarters that have moved to Panma to avoid taxes, which he called "the Panama Scoot."

President Donald Trump and the GOP crafted a tax reform bill that lowered the corporate tax rate, perhaps hoping that these companies would suddenly be willing to pay taxes and move their shell corporations back from an island where they pay zero in taxes to the U.S. where they'll pay millions. In fact, Oliver explained that a grand total of 18 major American companies pay zero percent in taxes.

Further, the GOP's tax cut changed the code so that corporations that hide their cash overseas are penalized, but their tax rate was cut from 35 percent to only 8 percent. So, essentially, any so-called accountability Trump claimed he'd enact was offset by an overwhelming tax cut.

Watch his full assessment below: