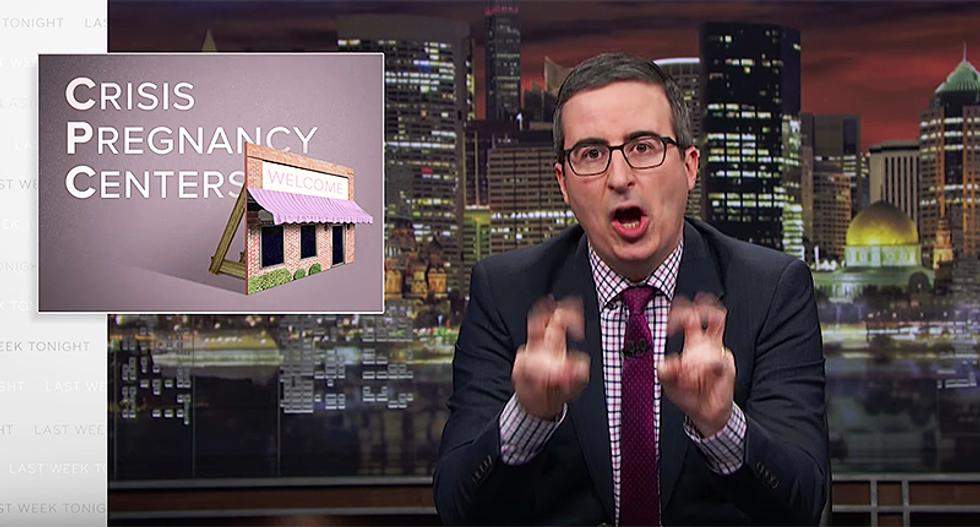 In his Sunday episode of "Last Week Tonight," comedian John Oliver outlined the so-called "clinics" that anti-choice activists have set up and claim help pregnant women.

Oliver walked through the many ways in which the crisis pregnancy centers lie to women.

"What is happening with CPCs is that, way too often, women with unplanned pregnancies are being actively misled when trying to access health care. And CPCs seem happy to have women confuse them for abortion clinics," he said.

He then played a clip of an anti-choice activists speaking at a conference for such clinics that perfectly illustrates how they lie to their "patients."

"We want to appear neutral on the outside. The best call, the best client you can ever get, is one that thinks that they're walking into an abortion clinic," said Abby Johnson. "Okay? Those are the best clients that could ever walk in your door or call your center — the ones that think you provide abortions."

Oliver then noted that many of the names of such centers are misleading and use the word "choice" in them to make it sound like they're open and accepting. He played a clip of a woman calling a fake clinic to ask how much it costs to get a first trimester abortion.

"I really can't," the receptionist responded. "It's the policy that we like people to come in and we can discuss then and go forward."

Oliver explained, "So CPCs can lure women to meet with them on false pretenses. Basically, they are catfishing them."

Oliver then closed his segment by opening up his own crisis pregnancy center, just to illustrate how easy it is to own and operate them.