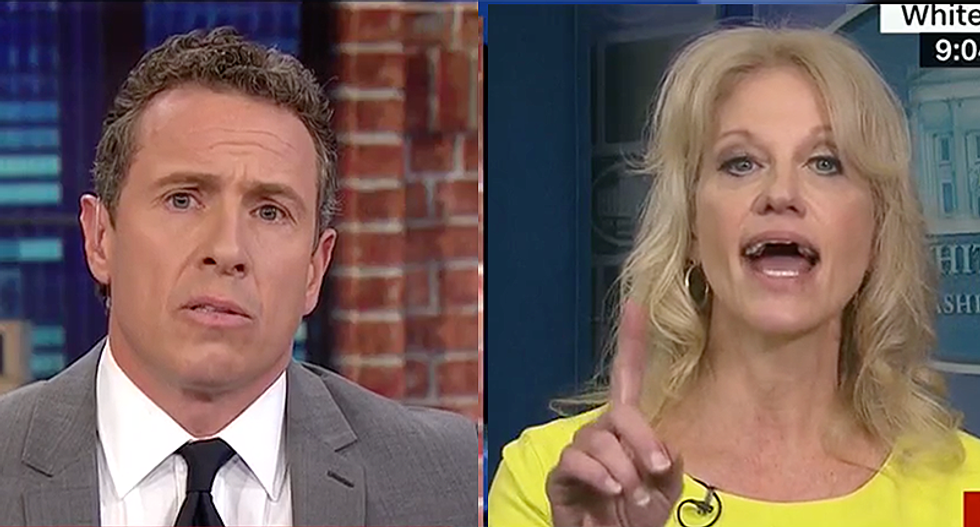 Parroting GOP talking points that James Comey "loves being around power," marking the second time she'd used the phrase in an interview Monday. Conway then pivoted to allege former deputy FBI director Andrew McCabe was some kind of Democrat, which Cuomo had to cut in to correct.

"I find it interesting that you and the president call that a lie," Cuomo also pointed out the claim that lead intelligence staff, including McCabe were Democrats. It is a fact that has been disproven.

"I saw it last night and thought, 'This guy swung an election? I don't think so,'" Conway said, mocking Democrats who complained about Comey hurting Clinton's election.

"Well he would up hurting her," Cuomo said.

Conway then began talking over Cuomo and then alleging he was interrupting her. "You're trying to go viral," Conway claimed of Cuomo's statements.

"You're the one who goes viral," Cuomo said of Conway's statements in interviews.

Conway then blasted Comey for not coming to New York to meet with Trump before their January meeting.

"What he did, by no measure hurt Hillary Clinton," Conway tried to claim. The two then devolved into a battle about relitigating the 2016 election, with Conway hurling accusations.

"No, it's taken you a long time to prove Russian collusion," Conway said pointing to Cuomo.

"It's not my job," the journalist said.

Conway then tried to claim that the FBI officials at the top of the agency were all Democrats out to help Hillary Clinton. Cuomo cut in to question that they supported her so much they announced twice she was under investigation by FBI, including once just weeks prior to the election.

"I haven't asked you anything about that -- it's like you're having a different conversation," Cuomo noted of the things Conway was saying in reply to his questions.

Conway went on to trash Comey for going into the gutter for a second time in the morning, by talking about the size of Trump's hands.

When Cuomo asked if she can guarantee that Rod Rosenstein's job is safe. Conway seemed angry at the question and implied that no person ever knows their job is safe. She specifically cited Cuomo himself and his own job security, which he said his producer was saying in his ear he was safe.

"You want this to be about something other than what the whole day is about here," Conway alleged. "Which is whether or not the president has complied with an investigation that your network and others have alleged would lead to evidence of collusion with Russia.

"No kidding, so let's be honest," she clapped back. "How much air time did you give to Russian collusion last year?"

"I hope it's a lot, I hope it's a real lot," Cuomo said back while Conway rambled over him. "Because it really matters, because they're still trying to tear us asunder and they are being effective at it and they're still doing it. And the president has been slow to respond. You guys don't even have a real plan for how to combat it because the president conflates his own personal prospects -- you won't even tell me that he won't make a move on the special counsel."

"Excuse me," Conway cut in. "He makes all of the personnel decisions around her and you know it."

Conway then alleged that if Comey was so concerned about Russian collusion that he would have spoken to Trump months prior to their January 2017 meeting.

"We don't know any of that," Cuomo said. "This is like the secret club stuff that you guys were pushing for about a week and a half. There's this secret agency that meets on the outside. It's not helpful. Not helpful."

"He said the president's tie was too long," Conway cut to. It devolved into absurdity from there.