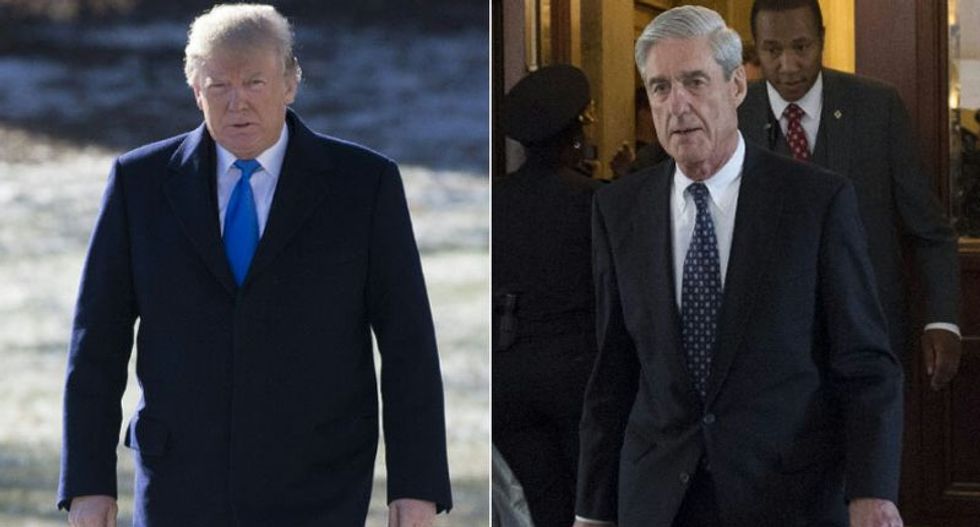 As US President Donald Trump steps up his attacks on the Russia probe, denouncing it as "corrupt," legal experts are divided over whether he has the authority to fire Robert Mueller, the former FBI chief heading the investigation.

Most constitutional scholars argue that only the deputy US attorney general, Rod Rosenstein, has the power to dismiss the special counsel.

But the White House -- and an increasingly frustrated Trump -- clearly disagree.

"We've been advised that the president certainly has the power to make that decision," White House Press Secretary Sarah Sanders said Tuesday.

"I know a number of individuals in the legal community, and including at the Department of Justice, (believe) that he has the power to do so."

Not so, said Peter M. Shane, a law professor at The Ohio State University.

"Mr. Mueller may be fired only by the acting attorney general and only for 'good cause,'" Shane said.

"The idea that the president may fire Mr. Mueller directly is based on an incorrect understanding of the scope of the chief executive's constitutional authority," Shane told AFP.

Trump has repeatedly and vehemently denounced as a "witch hunt" the Mueller probe into whether his 2016 campaign colluded with Russia to get him elected.

As members of Congress on Wednesday introduced a bipartisan bill that would protect the special counsel, Trump further ratcheted up his attacks on the Mueller probe.

"Much of the bad blood with Russia is caused by the Fake & Corrupt Russian Investigation, headed up by all Democrat loyalists, or people that worked for Obama," Trump tweeted. "Mueller is most conflicted of all... No Collusion, so they go crazy!"

Most legal experts believe that Rosenstein, who appointed Mueller, is the only one with the authority to fire him since Attorney General Jeff Sessions has recused himself from the affair.

"Trump can order Rosenstein to fire Mueller," Kent said. "Rosenstein could comply or refuse. If he refused, Trump would likely fire Rosenstein.

"Trump could keep firing people down the chain of command until he found someone willing to fire Mueller," Kent said.

Such a scenario evokes the 1973 "Saturday Night Massacre," when president Richard Nixon ordered the firing of special counsel Archibald Cox, who was looking into the break-in at Democratic headquarters at the Watergate.

The move backfired and triggered impeachment moves against Nixon by the House of Representatives and eventually led to his resignation.

Alan Dershowitz, a leading constitutional law scholar, dined with Trump at the White House on Tuesday night and said it would be a "mistake" for the president to attempt to get rid of Mueller.

"I think that it would be perceived as political and I think a lot of Republicans would be concerned about that," Dershowitz told Slate.com. "I think it would be a political mistake to do that.

"I think his much better course is to proceed with the investigation, and tell the truth," Dershowitz said.

Several top Republicans said they do not believe Trump will try to fire Mueller, whose probe has led to charges against members of the president's inner circle that include money laundering and lying under oath, but -- so far -- no direct charges of collusion with Russia.

It would be "suicide" for the president to fire Mueller, said Republican Senator Chuck Grassley, who heads the Senate Judiciary Committee.

Republican House Speaker Paul Ryan, who announced Wednesday that he will not run for re-election in November, said he has received "assurances" from the White House that Trump will not move against Mueller or Rosenstein.

"I think they should be allowed to do their jobs," Ryan said. "We have a rule of law in this country and that's a principle we all uphold."