This is what Lyndon B. Johnson did when he heard that Martin Luther King Jr. had been killed 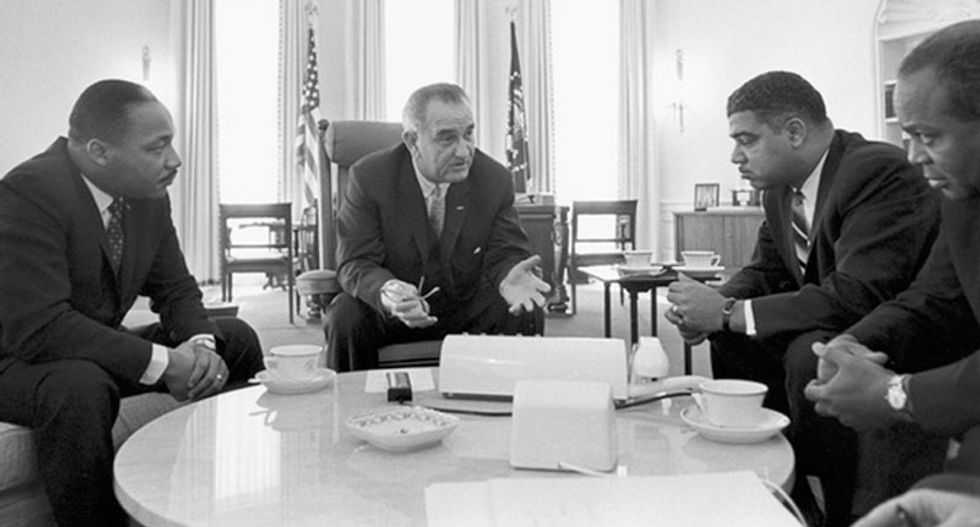 But, as he prepared to attend a Democratic fundraiser that evening, a note arrived reading: “Mr. President: Martin Luther King has been shot.”

Shortly after, another message came: “Mr. President: “Justice has just advised that Dr. King is dead.”

LBJ lamented, “I rarely have felt that sense of powerlessness more acutely than the day Martin Luther King, Jr., was killed.”

Immediately, Johnson started planning a special address to a joint session of Congress to present a comprehensive program for African-Americans. LBJ told Califano, “We’ve got to show the nation that we can get something done.”

Aides were unenthusiastic, so a frustrated, LBJ barked: “Goddamn it, this country has got to do more for these people, and the time to start is now.”

Here was one of many times over the next few days that Johnson showed empathy and concern toward African-Americans. He wanted desperately to quell the violence through action.

During a meeting the following day, LBJ acknowledged the feelings of the protestors. “If I were a kid in Harlem. I know what I’d be thinking right now: I’d be thinking that the whites have declared open season on my people, and they’re going to pick us off one by one unless I get a gun and pick them off first.”

Publicly, however, he promoted conciliation and progress, telling a national audience: “We have rolled away some of the stones of inaction, of indifference, and of injustice,” but “our work is not yet done. But we have begun.”

Soon, calls came for federal troops to quell the disorder in cities, including Washington, D.C. Despite cries for harsh actions, Johnson remained committed to preventing additional bloodshed. He told one aide: “I don’t want Americans killing Americans. I may not be doing the popular thing, or even the right thing, but no soldier in Washington has killed a civilian yet.”

But, even as he tried limiting bloodshed, LBJ maintained a sense of humor. Reports circulated that Stokley Carmichael had organized a march on the “posh” homes in Georgetown of the newspaper editors and columnists who loved to criticize Johnson.

The president smiled when he read the report and bellowed, “Goddamn! I’ve waited thirty-five years for this day!”

As troops flooded into other cities, including Baltimore and Chicago, the president and his staff continued working on a series of proposals for Congress, totaling more than $5 billion.

But there was also realism on what Congress might accept. One aide emphasized: “What’s the use of escalating the demands for the Negro when Congress won’t move on what we’ve already sent up there?”

But central to the matter was the inability to formulate a reasonable proposal, despite LBJ desperately wanting to do so. One advisor remembered LBJ receiving a sheaf of paper with recommendations. His face sagged as he characterized them as “all vanilla; they wouldn’t begin to touch our problem.”

Then, he cut to the heart of the issue. “Until we all get to be a whole lot smarter, I guess the country will just have to go with what it has already.”

Despite the absence of a grand plan, the president succeeded in one area, the Fair Housing Act. For years, he had pushed it despite strong opposition from various constituencies, including realtors.

However, after much politicking by the White House, the bill passed. LBJ proudly stressed, “through the process of law, we shall strike for all time the shackles of an old injustice.”

While happy, LBJ wanted more: “I call upon the Congress to now complete its work of hope for millions of Americans” by passing other measures so that “we can move forward with our programs of social justice and progress.” But little occurred as a lame duck president battled an increasingly conservative Congress in an election year.

Nevertheless, in 1972, Johnson rose at a civil rights conference at his presidential library and said: “Let’s watch what’s been done, and see it is preserved, but let’s say we have just begun, and let’s go on. Until every boy and girl born in this land, whatever state, whatever color, can stand on the same level ground, our job will not be done.”

Less than a month later, he died. However, the empathy and desire to address the challenges of African-Americans and others disadvantaged remained on display in 1972, just as in 1968. Their echoes remain in many today, even fifty years later.

Kyle Longleyis the Snell Family Dean's Distinguished Professor of History and Political Science at Arizona State University. He is the author of numerous books, including LBJ’s 1968: Power, Politics, and the Presidency in America’s Year of Upheaval(Cambridge, 2018).