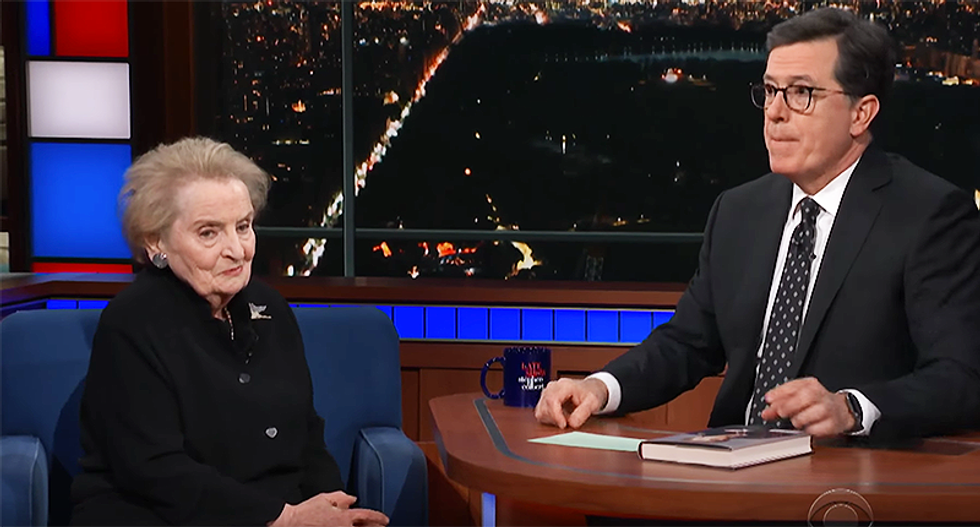 Albright began by explaining that the criticisms being lodged at Obama don't hold water because he tried to work with the Republican-led Congress to act on Syria to no avail.

"I do wish -- Barack Obama did put down a red line and I personally wished that we had followed through on that," she began. "However, what had happened was that Barack Obama was looking for support from Congress because he didn’t want to do something outside the law, and then Congress would not support that. But I do think the thing that is the issue, President Trump actually had the same event a year ago, when they took this kind of action. The truth is that it was just a 'one off,' because there is no Syrian strategy.”

The problem, as she sees it, is that there is no real strategy around Syria coming from the Trump campaign.

“The main issue here, Stephen, is that there is no strategy,” she continued. “And then there is a new national security advisor, John Bolton, who has been very, very hawkish about what should be done in terms of using force, and it has to be part of some overall plan.”

That wasn't the only thing she ripped into Trump about, however. She blasted the current president for demolishing national agreements, undermining public institutions and completely disregarding respectable civil discourse.

"Instead of standing up for the values of a free society, Mr. Trump's oft-vented scorn for democracy's building blocks has strengthened the hands of dictators," she said. "Fascism — and the tendencies that lead toward fascism, pose a more serious threat now than at any time since the end of World War II."

Colbert noted Americans search for strong leaders and asked whether there is a line between strength and fascism.

"Well, very much so, but the problems with fascist tendencies is that the leader thinks he is above the law," she noted. "If he actually says that the press is the enemy of the people. When there are a lot of simplistic answers. When there are rallies in which people are kind of pushed to be violent. And basically when there's kind of a sense that the system is against you. That democracy doesn't work and that courts are not useful -- that the judiciary branch is not important."