'This makes no sense': Whoopi Goldberg tries -- and fails -- to break down Trump's latest rambling speech 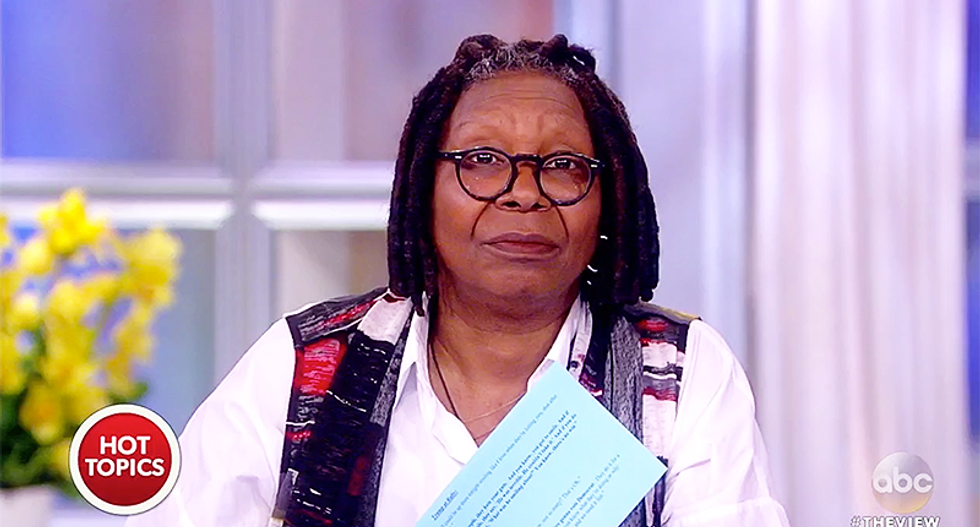 President Donald Trump spent Saturday speaking to an audience about a rambling list of topics that meandered from domestic to foreign policy and everywhere in between.

Republican commentator Ana Navarro joined "The View" while Meghan McCain was out with her family in Arizona. She explained that the major things that concerned her were that when Trump asked if there were any Hispanics in the room "the entire crowd booed at the mention of Hispanics." The second piece that concerned her was the Trump supporter rushing to the media pen and telling them that they are horrible and need to get out of his country.

"Maybe the part at the end of this rally where one of his supporters went over to the media pen and started telling them you degenerate filth, get out of my country," she continued. "If you want to have a real conversation about the White House Correspondents' dinner, about the tenor of what happened there about the tone, about civility, we also have got to condemn and look at what he's doing, because you see, I can't bring myself to hold comedian for one night to a higher standard than we hold the president of the United States for his entire term."

Joy Behar explained that as a person in power today, Trump can get away with anything.

"So, you know, I was saying that I was fired for saying something one time that he has said 20 million different ways," she continued. "So, he can get away it. The rest of us cannot. He was saying the Democrats are against the military. This is a man who dodged the draft five times. Who denigrates the Gold Star family. Who denigrated Meghan's father, John McCain. He just gets up there and says, oh, Democrats hate the military and veterans, I mean, and he gets away it."

The group of women then read aloud some of the things Trump said. One thing specifically

"Now, just as a sentence, this makes no sense," Goldberg said. "Just structurally what are you saying? OK, so we have a lot of issues and at some point someone is going to say, 'Hey, you know what, we need to start holding this guy to the same standards.' If you're going to lead the country that's not the direction I want to go in. I know that we have laws for a reason. I know that the Constitution works. I don't always like it. I would like to massage it, but I know it's there for a reason. This is a good thing for us. It's good for us to have laws because it keeps people from dictatorships."