All-male no more: London's Parliament Square gets first statue of a woman 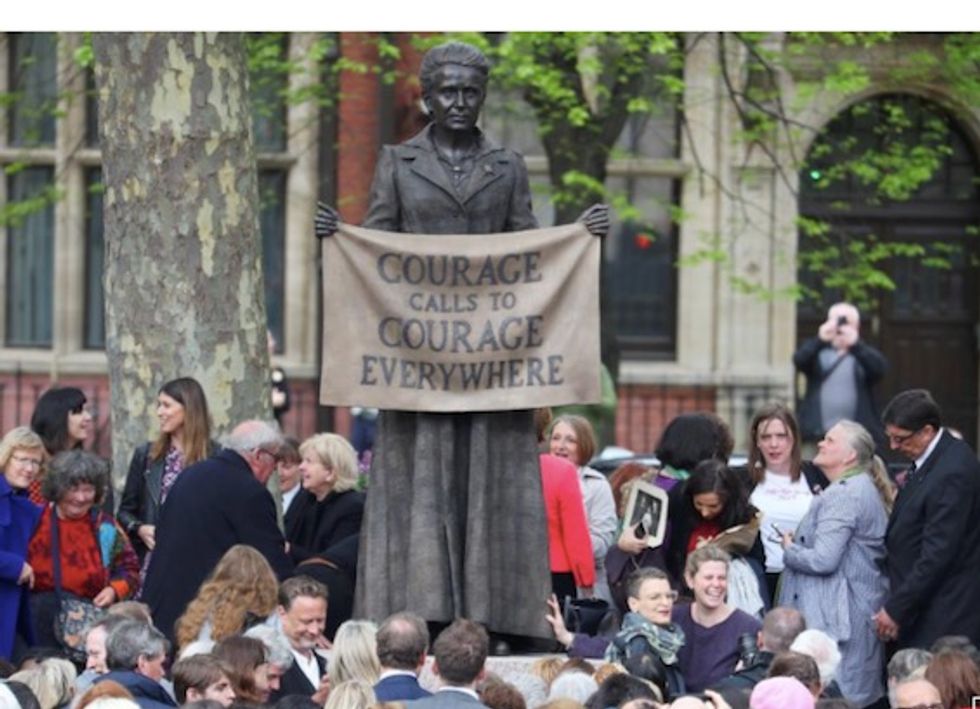 People attending the official unveiling gather around the statue of suffragist Millicent Fawcett on Parliament Square after the ceremony, in London, Britain, April 24, 2018. REUTERS/Hannah McKay

A statue of 19th century British feminist leader Millicent Fawcett was unveiled in London’s Parliament Square on Tuesday, the first monument honoring a woman in a public space previously occupied by 11 statues of men.

Fawcett led campaigning for women to be given the vote in Britain, and the unveiling of the statue was the high point in a series of events marking 100 years since some women were granted that right for the first time in 1918.

Fawcett is represented in middle age, with her head held high, gazing straight at the Houses of Parliament and holding a banner that reads “Courage calls to courage everywhere”, a quote from one of her speeches.

The bronze by Turner Prize-winning artist Gillian Wearing - also the first statue by a woman to stand in the square - took its place among monuments to the likes of Winston Churchill, Mahatma Gandhi, Nelson Mandela and Abraham Lincoln.

Prime Minister Theresa May, Britain’s second woman head of government, said during the unveiling ceremony that she would not be standing there today, in that role, had it not been for Fawcett’s struggle.

“Few of us can claim to have made an impact as significant and lasting as Dame Millicent, and it is right and proper that, today, she takes her place at the heart of our democracy,” May told an audience of politicians, business leaders, feminist campaigners and schoolchildren.

Among onlookers was Kimberley McGinty, who works as an advocate for women in the construction industry. She had come with her mother Anne Ballard, and her 13-year-old daughter Millicent, who is named after Fawcett.

“I wanted a name with meaning, a strong character, somebody she could be proud of,” said McGinty, explaining her choice. The trio said they found the unveiling emotional and inspiring.

“There is still a long way to go for women,” said Ballard.

The honoring of Fawcett and wider celebrations of the centenary of women’s right to vote have gained additional relevance due to recent revelations about the extent of the gender pay gap in Britain and other persistent inequalities.

Fawcett started campaigning for votes for women when she was 19 years old, in 1866. She dedicated the following six decades of her life to the cause, leading what was then known as the suffragist movement — as opposed to the suffragettes who adopted more militant methods of activism.

She lived to see Britain’s then all-male parliament pass the Representation of the People Act of 1918, which gave the right to vote to some women over 30 years old, and later the Equal Franchise Act of 1928 which equalized the age at which men and women could vote. She died in 1929.

The statue came about as a result of a campaign launched by feminist Caroline Criado-Perez, who had already had success in pushing for a woman, novelist Jane Austen, to be represented on a bank note.

Criado-Perez said her research had shown there were more statues in Britain of men called John than there were statues of women. Excluding Queen Victoria, fewer than 3 percent of statues represented women, she said.