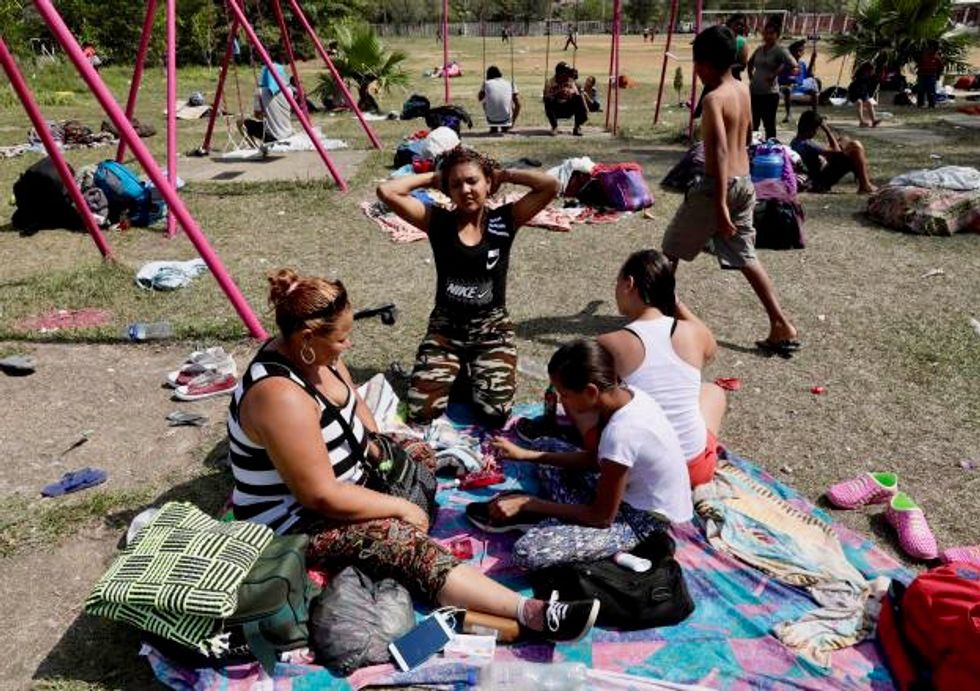 Hundreds of Central American migrants traveling in a “caravan” were in limbo in the northern Mexican city of Hermosillo on Monday on the final stretch of a journey to the United States where President Donald Trump ordered officials to repel them.

About 600 men, women and children from Guatemala, El Salvador and Honduras had been waiting on Monday in Hermosillo, Sonora to board a train or take buses for the remaining 432 miles miles to the border with California.

Traveling together for safety, their numbers were down from a peak of about 1,500 people since they began their journey on Mexico’s southern border with Guatemala almost a month ago, as smaller groups broke away.

Many women and children in the group were planning to seek asylum in the United States after they reach Tijuana, said Rodrigo Abeja, a coordinator from immigrant rights group Pueblo Sin Fronteras that has been organizing similar caravans for several years.

Moving from town to town, the impoverished and bedraggled travelers became a lightning rod for U.S.-Mexico relations after Trump launched a succession of tweets in early April, telling Mexican authorities to stop them.

On Monday he again lashed out, threatening that failure to stop the caravan could stall the already tense renegotiation of NAFTA. [nL1N1S00QK]

“I have instructed the Secretary of Homeland Security not to let these large Caravans of people into our Country,” Trump tweeted Monday morning. “It’s a disgrace. We are the only Country in the World so Naive! WALL”

Following Trump’s Tweets, the group was considering applying for asylum status in Mexico, a Reuters witness traveling with them said.

Trump’s concern with the caravan coincides with recent U.S. border patrol data showing a sharp rise in the number of immigrants found illegally crossing the border, a setback after immigration from Central America evaporated in the months following his election.

While it is not clear what will happen when the group arrives at the border, or if it will disperse before it gets there, there are signs the U.S. is preparing legal defenses. Following Trump’s messages, U.S. Attorney General Jeff Sessions said he had ordered officials to ensure that sufficient prosecutors and immigration judges were available at the border “to adjudicate any cases that may arise from this ‘caravan.’”

Some migrants told Reuters they would stay in Mexico. Others said they would find other ways to cross. At least 200 were likely to claim asylum if they made it over the border, according to migrants and caravan organizers.

Marie Vincent, a U.S.-based immigration attorney who met the caravan on a stop along the way, said many of the immigrants had a strong case for U.S. asylum either because they faced political persecution, lethal threats from gangs, or violence because of gender or sexual identity.

Vincent said one of those with a persuasive case was the survivor of a flawed witness protection program in Honduras who had been “stabbed and shot at more times than he could count.”

Faced with another death threat, he escaped to Guatemala and then to Mexico from a hospital bed with the tubes still stuck in his body — one of them hanging from his stomach, she said.

Some of the group had been dissuaded from seeking asylum by warnings about detention conditions they might endure in the United States, she said.

Although Honduras and El Salvador rank among countries with the highest homicide rates in the world, rejection rates for asylum claims from those countries are very steep.