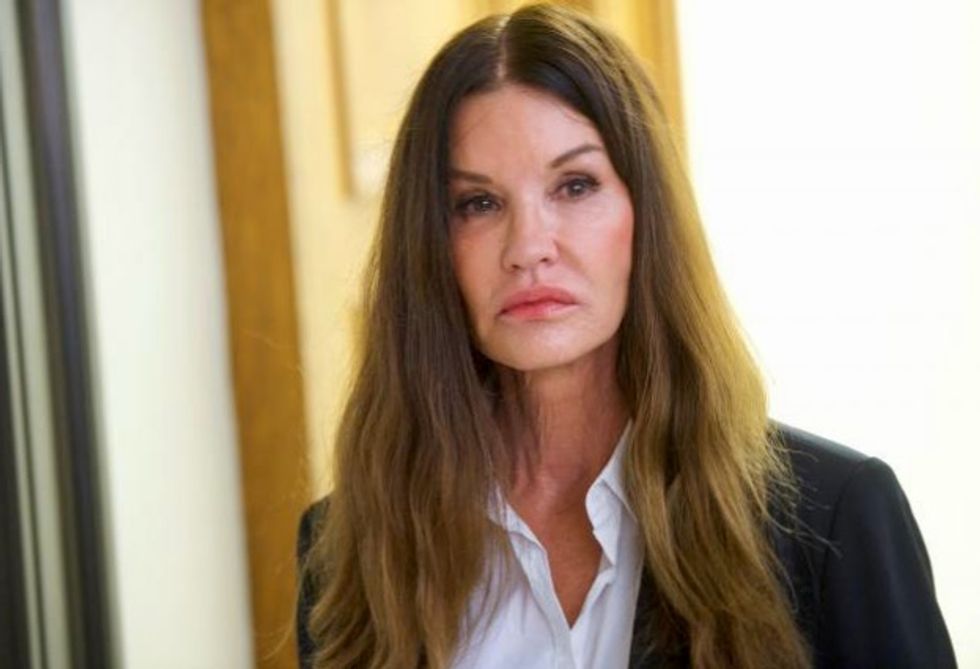 Model Janice Dickinson, walks through the Montgomery County Courthouse while on a break from testifying against actor and comedian Bill Cosby during the fourth day of his sexual assault retrial case in Norristown, Pennsylvania, U.S., April 12, 2018. Mark Makela/Pool via Reuters

Former supermodel Janice Dickinson testified on Thursday that Bill Cosby drugged and raped her at a Lake Tahoe home in 1982, a story similar to those of other alleged victims called as witnesses in the comedian’s sexual assault retrial.

“I wanted to hit him, wanted to punch him in the face,” said Dickinson, a highly successful model in the 1970s and 1980s. “I felt anger, was humiliated, disgusted, ashamed.”

Cosby, who played the loveable patriarch and “America’s Dad” on “The Cosby Show,” is on trial in Pennsylvania for a second time on accusations of drugging and sexually assaulting former friend and colleague Andrea Constand, 45, in 2004.

In all some 50 women have accused Cosby of molestation going back decades. All but Constand’s case were too old to be prosecuted, and Cosby’s first trial ended in a mistrial last June due to a deadlocked jury.

Cosby is accused of giving pills to college administrator Constand and assaulting her at his home near Philadelphia.

Cosby has denied the charge of aggravated indecent assault of Constand, saying any sexual contact was consensual. His lawyers have portrayed Constand as a gold-digging con artist.

Dickinson is the fourth of five accusers permitted by Montgomery County Judge Steven O’Neill to tell their stories to the jury in the suburban Philadelphia courtroom.

He flew her to Lake Tahoe, Nevada, where she met Cosby and his musical director for dinner and complained of menstrual cramps. “I have something for that,” Cosby said, according to her testimony.

She testified that he gave her a little blue pill, which she swallowed. Cosby then took her back to his room, where Dickinson, 27 at the time, shot several pictures of him with her Polaroid camera that were projected in court.

“I was really light-headed,” she said. “When I spoke, it didn’t sound like words were coming out. We weren’t discussing my career. He was on the phone.”

She testified that when he finished his call, he climbed on top of her.

“I remember his breath, the taste of his kiss, cigars and espresso. Here was ‘America’s Dad’ on top of me, a happily married man with five kids, and how very, very wrong it was,” Dickinson said.

She found semen between her legs the next day, she said. Confronting Cosby later that day, she demanded to know why he did it. His response was silence and a facial expression that conveyed, “You’re crazy,” she testified.

Dickinson said she did not report the assault to police out of fear it would destroy her career. She said she had long struggled to make it as a model and finally had premiere clients such as cosmetics titan Revlon Inc “who would not have appreciated it if I had been raped and gone to the police.”

Defense lawyer Thomas Mesereau began his cross-examination by focusing on a book ostensibly authored by Dickinson but actually ghost-written by Pablo Fenjves, who also penned O.J. Simpson’s book, “If I Did It.”

Dickinson said she wanted the book’s sections about her rape to be complete and honest and gave that information to Fenjves but its use was overruled by publisher Judith Regan.

Fixing Texas' power grid was about the only thing Republicans and Democrats in the legislative session seemed to agree on earlier this year. Power companies were in the hot seat, as millions of Texans who endured a week of subfreezing temperatures with no power demanded sweeping, multibillion dollar improvements to prevent another deadly disaster — and lawmakers promised action.