MSNBC pundit bulldozes Sinclair defender with lesson on free press: 'Our role is to be a check and balance' 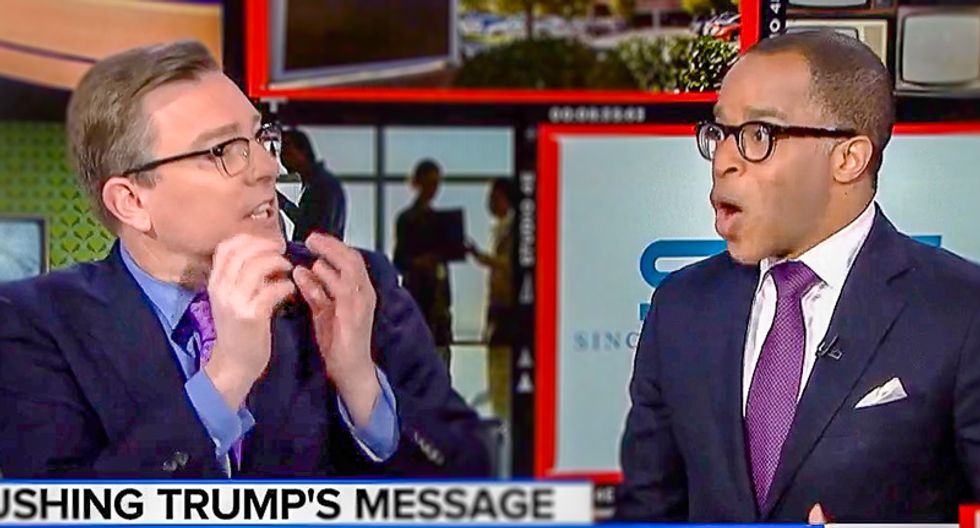 MSNBC contributor Jonathan Capehart on Monday schooled libertarian writer Matt Welch about why it is dangerous for a group like right-leaning Sinclair broadcasting to launch an attack on the American media.

MSNBC host Stephanie Ruhle noted during a panel segment that Sinclair had recently come under fire for requiring local news anchors across the country to air news reports that are biased and often false. In one recent case, anchors were forced to accuse other news outlets of spreading "false news."

Welch, who is editor at large for the Koch brothers-backed Reason magazine, argued that the reaction to Sinclair was "overblown."

"What is dangerous here about those scripts?" he opined. "I think that's a little overheated. It's a promo video... People in the news business are given to over-promoting their importance in the democracy."

"Let's keep something in mind," he suggested. "Journalism, reporters, what we do here at MSNBC, what we do at the Washington Post is the only profession that is protected in the Constitution of the United States. Journalists don't have some 'overblown' view of their role in our democracy... Our role is to be a check and balance on power."

"When The Washington Post says democracy dies in darkness, we're not being hyperbolic," the MSNBC contributor continued. "We're talking about this [Sinclair] story, because if that deal goes through, more than 70 percent of the country is going to be -- families are going to be watching 'news' from Sinclair Broadcasting."

Ruhle reminded Welch that most Americans are not aware that Sinclair stations are promoting biased news.

"When my mom and dad tune in to their local news, they're not thinking there is any sort of agenda," the MSNBC host explained.

Welch dismissed that point by saying that other sources of news were available on the Internet.

"What happens when you only have one source?" Capehart wondered. "And that one source is perpetuating falsehoods and lies?"

"Go out and find somebody that gets only one sources [of news]," Welch said. "It doesn't exist anymore."

"There are lots of people who don't use the Internet," Ruhle observed. "My mom and dad don't use it."

"I would like to see this fact checked," Welch complained.