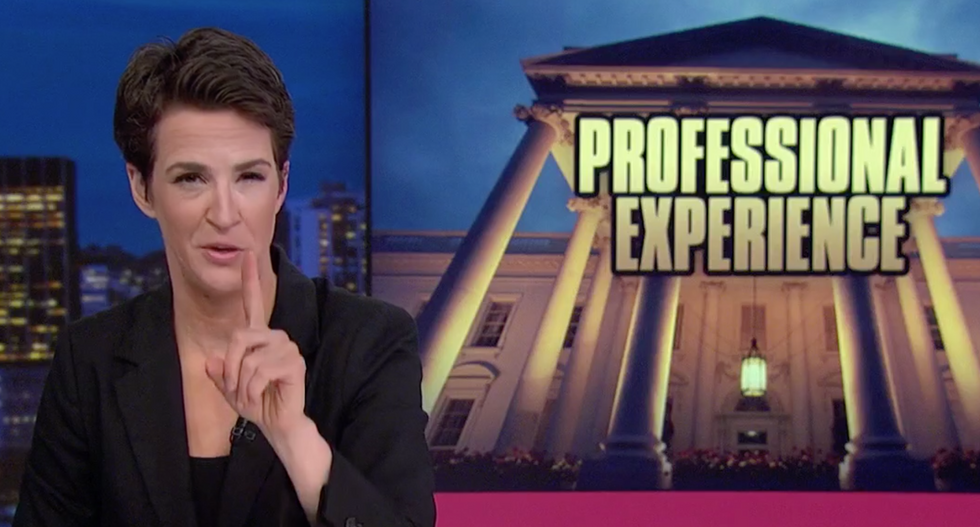 Maddow detailed the departures of members of the National Security Council who “have gone suddenly in the past three weeks, at least a half dozen of them. John ‘Great White Death’ Bolton has cleaned the place out quickly,” Maddow said. "But he's not replaced them.”

The host brought out “the wall” of Trump White House departures, zeroing in on “this guy”—former national security analust Ezra Cohen-Watnick, who served on the National Security Council under Michael Flynn. Cohen-Watnick later played a major role in the “unmasking” conspiracy created by Rep. Devin Nunes (R-CA) and other Trump loyalists in Congress.

“That guy [Cohen-Watnick] was fired months ago as the intelligence director at the National Security Council,” Maddow said. ”He was fired apparently after he helped Devin Nunes pull off the weird stunt at the White House that got him investigated for mishandling classified material.”

“Nunes said he tried to say he had the proof that Trump Tower had been wiretapped,” Maddow explained. “President Obama did not wiretap Trump Tower.”

“The stuff that [Nunes] got from the White House he got reportedly from a young guy who Mike Flynn had installed on the National Security Council,” the host added.

Citing Bloomberg, Maddow reported that Cohen-Watnick was hired to work for Attorney General Jeff Sessions—and that “Donald Trump personally ordered the Department of Justice to hire him.”