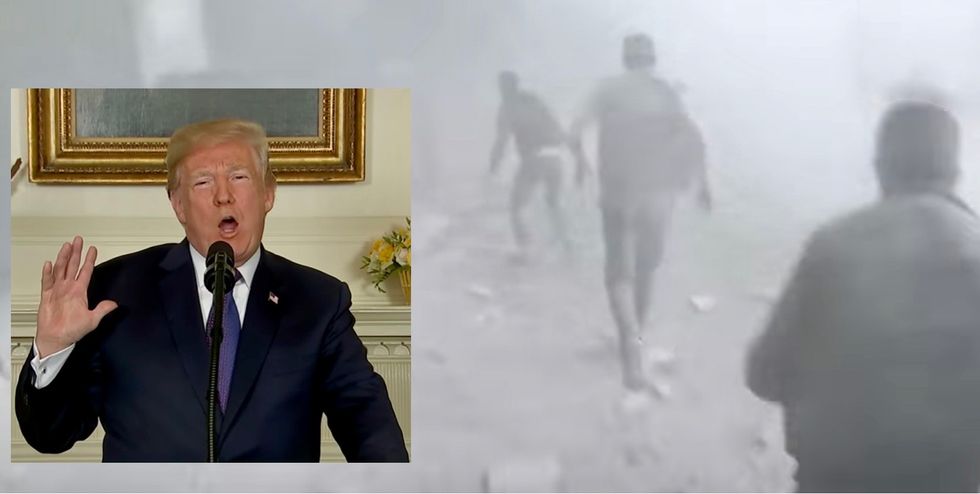 Donald Trump has declared "mission accomplished" after a "perfectly executed" missile strike which cost $165 million and killed no one.

A perfectly executed strike last night. Thank you to France and the United Kingdom for their wisdom and the power o… https://t.co/oIPJVo3zQn
— Donald J. Trump (@Donald J. Trump)1523708460.0

And, indeed, the mission does seem to have been accomplished—cable news has been flooded with news about the air strike, which means trump's lawyer Michael Cohen is free to smoke cigars with his buddies in the wake of his office being raided and tapes of conversations with various people in the Trump orbit possibly being taken by investigators.

Why was Trump—who loudly opposed bombing Syria during the Obama administration—eager to run this fatality-free attack even as it angered some of his staunchest defenders?

Fascism expert Sarah Kendzior lays it all out in a new column for Toronto's Globe and Mail newspaper.

"Mr. Trump’s condemnation of Bashar al-Assad is both disingenuous and self-serving," she writes. "His sudden concern over chemical weapons is as contrived as it was last year, when under a similar firestorm of scandal Trump launched strikes into Syria in an operation that did nothing for Syrians but plenty for Mr. Trump, winning him praise from gullible pundits who deemed him 'presidential' overnight."

We must be wary of praising Trump for firing missiles, because "world war a real possibility" now that Trump has tapped warmonger John Bolton as a security adviser, she says.

"[N]one of these actions have anything to do with aiding Syrians or stopping Assad. They are about Mr. Trump’s own deadly calculus – self-destruction as he faces legal jeopardy, or world destruction as an attempt at distraction, with Bolton and possibly Putin as his enablers."