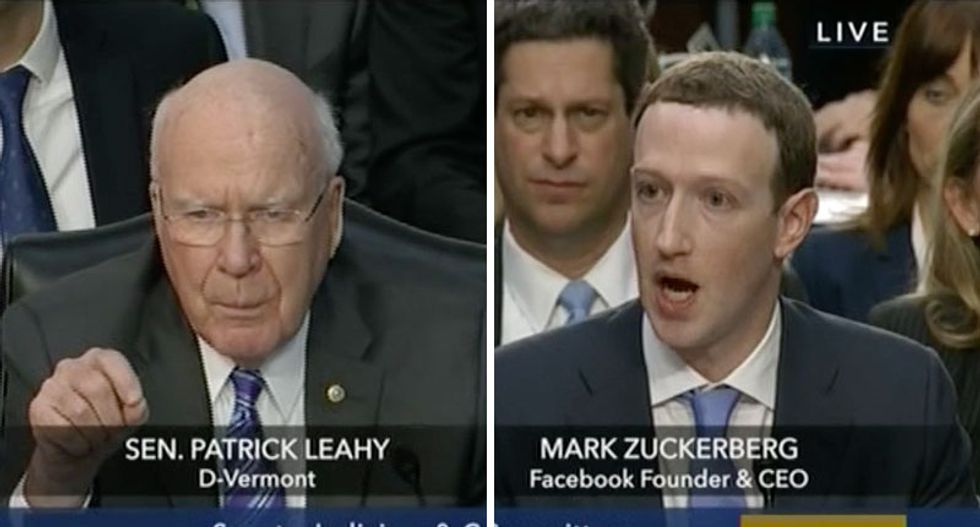 The most senior member of the United States Senate shut down Facebook founder and CEO Mark Zuckerberg during testimony before a joint hearing of the Judiciary and Commerce Committees.

Sen. Patrick Leahy (D-VT), the former chairman of the Judiciary Committee, revealed during his first 20 seconds of testimony that Special Counsel Robert Mueller had interviewed Facebook employees, but not Zuckerberg himself. Subpoenas may have also been served.

Then Sen. Leahy asked about Myanmar.

"Six months ago I asked your general counsel about Facebook's role as breeding ground for hate speech against Rohingya refugees," Leahy noted. "Recently U.N. investigators blamed Facebook for playing a role inciting possible genocide in Myanmar and there has been genocide there."

"This is a type of content I'm referring to," Sen. Leahy said, pointing to a poster of Facebook content. "It calls for the death of a Muslim journalist. Now, that threat went straight through your detection systems, spread very quickly, and then it took attempt after attempt after attempt, and the involvement of civil society groups to get you to remove it."

"Why couldn't it be removed within 24 hours?" Sen. Leahy asked.

"Senator, what is happening in Myanmar is terrible tragedy and we need to..." Zuckerberg began.

"We all agree with that," Leahy interrupted. "But U.N. investigators have blamed you -- have blamed Facebook -- for playing a role in that genocide."

"We all agree it's terrible," Leahy concluded.