'Did somebody bill for that?': MSNBC's Rachel Maddow cracks herself up after asking if Cohen billed Hannity for appearing on his show 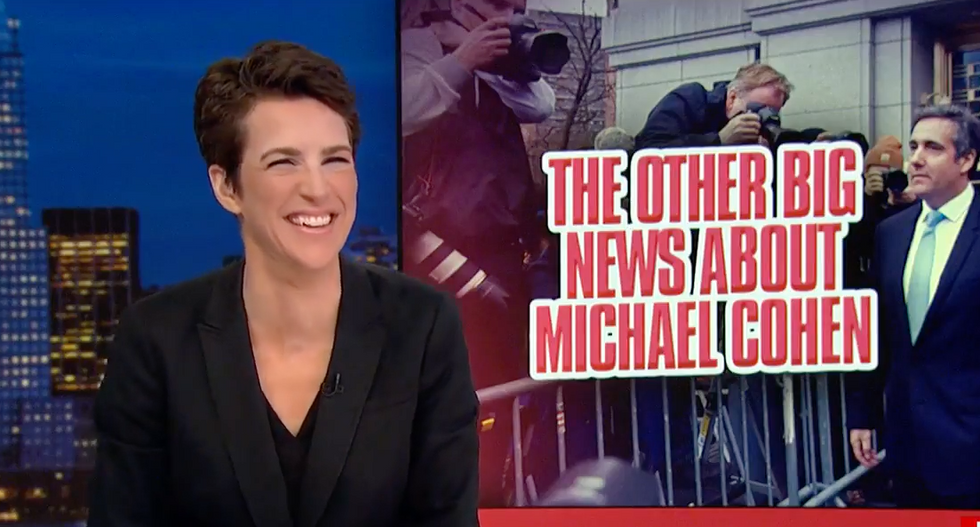 MSNBC’s Rachel Maddow on Monday cracked herself up as she was reporting on the Sean Hannity-Michael Cohen bombshell.

“There's been a lot of time and energy and ink spilled over the last 15 months or so over what the term ‘collusion’ actually means,” Maddow said. “But the allegations about Michael Cohen that are contained in the Christopher Steele dossier, the allegations that Donald Trump's personal attorney Michael Cohen met with Russian officials in Prague during the presidential campaign to facilitate payments to Kremlin-controlled hackers who were interfering in the election to help Trump—I don't care how good you are at linguistic gymnastics, I think we could all agree that that would absolutely be collusion.”

Maddow explained the that the Steele dossier allegations are “just” allegations, but noted when Cohen wanted to refute the charges, he luckily “knew a guy.” She then rolled a clip of Hannity offering Cohen a platform to say he’d never been to Prague.

During that clip, Hannity attacked the media and declared journalism “dead.”

“I don't mean to laugh, but it's just, these people—I did an opening monologue just in the last segment how journalism is dead,” Hannity said “It’s buried.”

“Dead,” Maddow repeated. “It's buried. Do you think that was a billable hour for Michael Cohen?”

“I mean, he has a meeting with Sean Hannity, right?” Maddow continued. “Sean Hannity meeting with his lawyer on national television without disclosing that the guy he was interviewing was actually his own lawyer. Did somebody bill for that? Journalism is dead.”