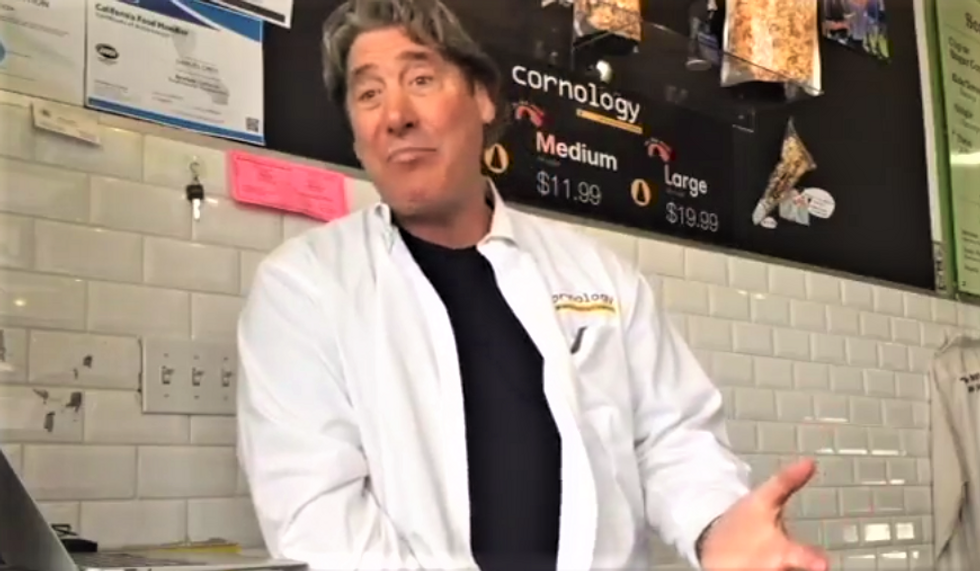 The CEO of an organic popcorn store in Emeryville, California was seen by multiple witnesses chasing black customers out of his store over the weekend while repeatedly calling them "n*ggers."

The San Francisco Chronicle reports that Mark Stone, the founder and CEO of Cornology, has confirmed that "an employee" of his hurled racial slurs at black customers while demanding they leave the store.

However, a photo taken of the "employee" at the time the incident took place looks exactly like Stone himself -- and a city official who is looking into the incident tells the Chronicle that it was, in fact, Stone yelling at the black customers.

The photo of the Cornology employee was taken by Bay Area resident Fay Eastman-Adams, who posted it on her Facebook account along with a description of what she witnessed.

"This business owner just chased a group of young black kids out of Cornology yelling, 'Don't come back here n*ggers!'" she wrote. "I asked him why are you yelling at those kids like that?! You can't go around calling people niggers. Those are kids. This nut says, 'well what do I call them?' Then went on to explain why he should be able to call them kids that derogatory racial slur."

Although Stone initially blamed an unnamed "employee" for hurling racial slurs, he stopped responding to the Chronicle's questions when confronted with evidence that he was the only employee working at the store that day.