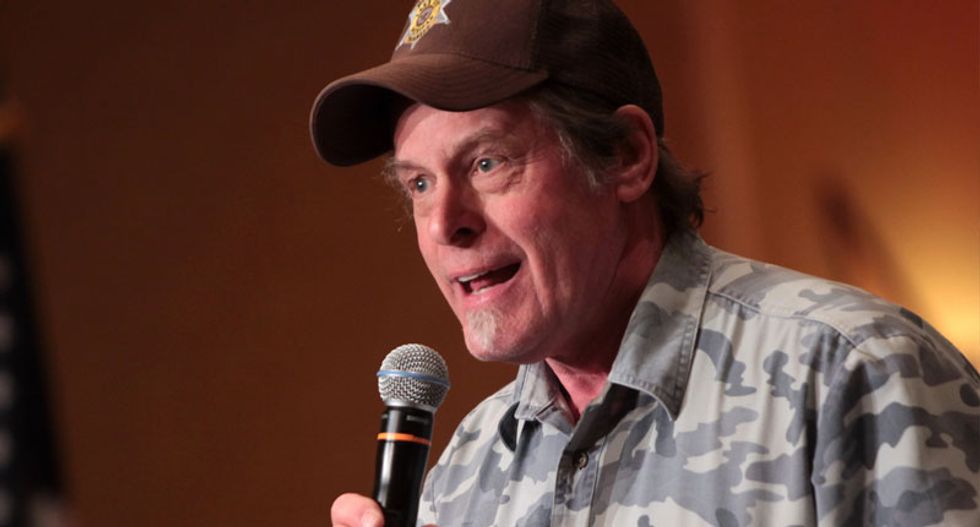 NRA board member Ted Nugent isn't backing down from his attacks on the Parkland high school mass shooting student survivors. "I stand by my words," the rock star said in a Facebook videoSaturday night. On Good Friday Nugent had declared that the teenaged student survivors who are advocating for gun control so no other children have to die in a school massacre, "have no soul."

On Saturday, in a rambling rant (below) about the media that was filled with inaccuracies Nugent said that news outlets including CNN, MSNBC, ABC, CBS, and HuffPost, along with organizations including Media Matters, MoveOn.org, and the Southern Poverty Law Center, had "claimed that it’s hate speech to identify the hate of people that call us child murderers, because we don’t believe in banning guns, which won’t save any lives."

(Also, theoretically, if all guns were banned, approximately 33,000 gun deaths per year would not happen. Some, presumably, might take different forms, but a large percentage would not.)

Nugent also tried to suggest that he did not attack the Parkland students directly. He had said, "These poor children, I’m afraid to say this and it hurts me to say this, but the evidence is irrefutable, they have no soul."

On Saturday, in a self-recorded video, Nugent told supporters, "I was told, coming out of a firestorm, a firestorm of guitar solo magic, that I was trending on Facebook because somehow, some dishonest, lying idiots claimed that my identifying, accurately and honestly, those in the gun control marches who call people who don’t agree with them child murderers – now if I called you a child murderer without having any evidence, that would be hate speech," he claimed, as Media Matters reported Monday.

"So they are guilty of hate speech. I merely identified that you have to have mush for brains to accept, blindly accept, the propaganda from the gun-hating, freedom-hating, America-hating, liberal Democrat left media. And who out there believes that so much of the media – who believes CNN, anybody? MSNBC, anybody? ABC, CBS, NBC? Certainly Media Matters, really? Boy, what a hypocritical title that is. Media Matters, MoveOn.Org, Southern Poverty Law Center, the Huffington punks, who believes these people?"

"So they claimed that it’s hate speech to identify the hate of people that call us child murderers, because we don’t believe in banning guns, which won’t save any lives. So they’re so blinded by their hate, and their mushy brains have so robotically accepted the propaganda ministry’s lies and deceit, that they’re hate isn’t hate. My identifying their hate, is hate. What the hell? So I stand by my words."

NCRM has contacted the NRA for comment but has yet to receive one.