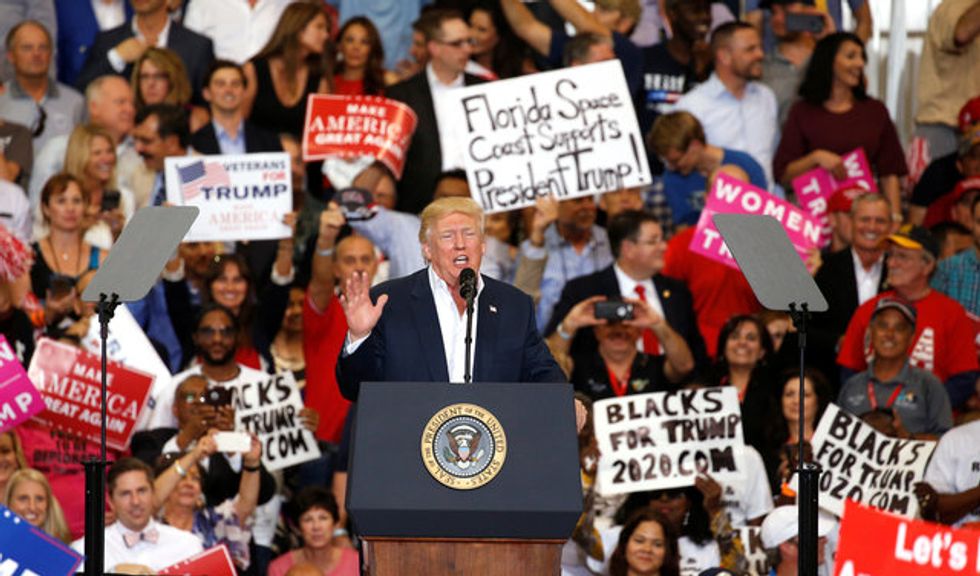 US President Donald Trump will lead a political rally during this year's White House Correspondents' Association dinner, his campaign team has announced, opting to hold the event in the small town of Washington, Michigan.

It is the second consecutive year Trump will be snubbing the annual dinner, amid his sustained attacks on much of the news media, and also the second time he has chosen instead to rally in a key battleground state he won in his 2016 election after speaking last year in Pennsylvania.

His campaign chief operating officer Michael Glassner made it clear that choosing Washington, a town of some 25,000 people on the outskirts of auto manufacturing hub Detroit, was no coincidence.

"While the fake news media will be celebrating themselves with the denizens of Washington society in the swamp that evening, President Trump will be in a completely different Washington, celebrating our national economic revival with patriotic Americans," he said in a statement released to the media.

The April 28 event will be begin at 7pm Eastern Time (2300 GMT) with entrance free and tickets available on Trump's campaign website.

Trump regularly accuses major media organizations such as CNN, The New York Times and The Washington Post of bias.

The Republican president's assaults on the "fake news" media have sharpened in recent weeks and have included attacks on CNN president Jeff Zucker and Amazon founder Jeff Bezos, who owns The Washington Post.

Since taking up the presidency, Trump has strongly favored news outlets that provide glowing coverage such as Fox News, the Daily Caller, Newsmax and Sinclair, a group of almost 200 local TV stations.

Margaret Talev, the president of the White House Correspondents' Association, said earlier this month that while Trump would not attend the dinner, the White House had said the president would "actively encourage members of the executive branch to attend and join us as we celebrate the First Amendment."

"In keeping with tradition, Press Secretary Sarah Sanders also will represent the administration at the head table," Talev added.