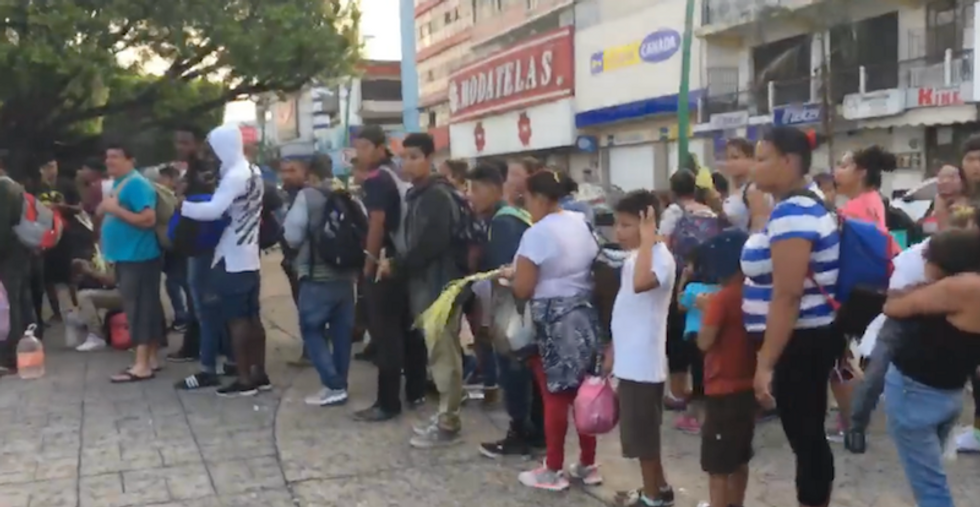 Marchers making their way through Mexico/Screenshot

Donald Trump and Fox News are freaking out about a "caravan" of migrants making their way north through Mexico.

Border Patrol Agents are not allowed to properly do their job at the Border because of ridiculous liberal (Democrat… https://t.co/DdTVIyin70
— Donald J. Trump (@Donald J. Trump)1522590994.0

Trump alleged that the caravan was "trying to take advantage of DACA."

That's not true, as DACA doesn't cover people who come to the U.S. now.

Rather, the march was organized by a group called Pueblos Sin Fronteras, which supports international workers rights and open immigration for jobs.

But 80 percent of the marchers are from Honduras and many of them were inspired by the sham election. According to a BuzzFeed reporter embedded with the caravan, they ofter chant “out with JOH,” referencing Juan Orlando Hernandez, the nation's conservative president.

Hernandez won an election that Organization of American States said was so deeply flawed that a new election was needed to produce a “fair and transparent” outcome. Uproar over election let to protests in which Hernandez's security forces fired on civilians, killing many.

Trump, who supports authoritarian strongmen in China and Russia, would not support the OAS determination or pressure the nation to hold a new election. So Hernandez remains president.

That is one of the reasons marchers set off from Tapachula, in southern Mexico. They are bound for the U.S. though the route has not been announced and may remain flexible.

Watch a short video from Pueblo Sin Fronteras below.