WATCH: DHS secretary flails as reporter asks if Trump wants to send troops to Mexican border because of Fox News 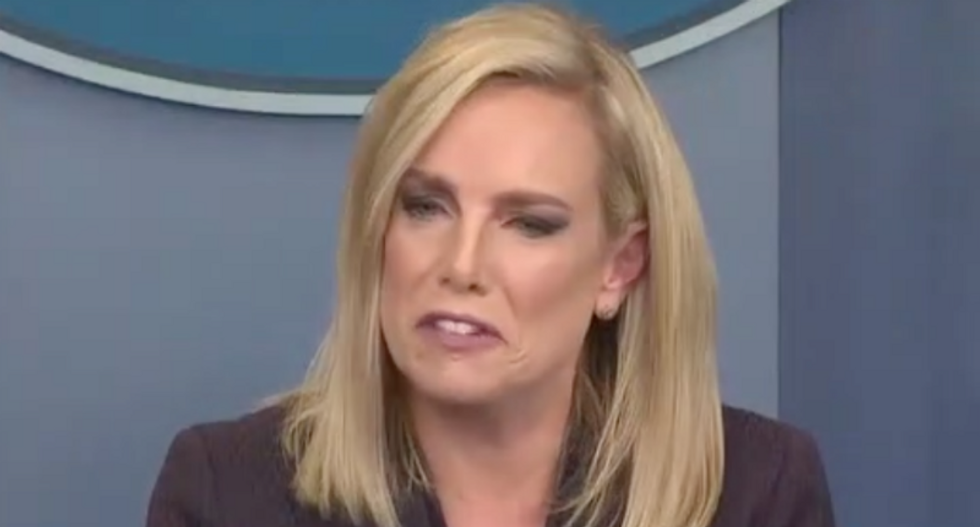 Homeland Security secretary Kirstjen Nielsen on Wednesday was quick to change the subject after a reporter asked her if President Donald Trump wants to send the National Guard to the American-Mexican border because of a segment broadcast by Fox News.

Prior to Nielsen taking the White House press podium to address the media, Trump announced yesterday that he intends to send troops to the border — and said that the so-called "caravan" of migrants making their way to the American border made him "very sad." Reports on the "caravan" circulated on Fox News over the weekend, but subsequent reporting by other outlets revealed that the group of mostly Central American migrants were taking part of an annual activist publicity stunt aimed at bringing attention to the issues faced by asylum seekers.

When a reporter asked Nielsen if Fox News' reporting may be partially responsible for his decision to send the National Guard to oversee the U.S.-Mexico border, she didn't have an answer for his question.

"This is the 440th day of the Trump administration," the reporter said. "You talk about the urgency, talk about it being April, but there's a lot of speculation in the country that this might have something to do with something that the president saw on television Sunday morning."

"Can you speak to that speculation?" he asked.

"I think what's true is that the president is frustrated," Nielsen said. "He has been very clear that he wants to secure our border."

"I think what you're seeing is the president taking his job very seriously in terms of securing our border and doing everything we can without Congress to do just that," she concluded.