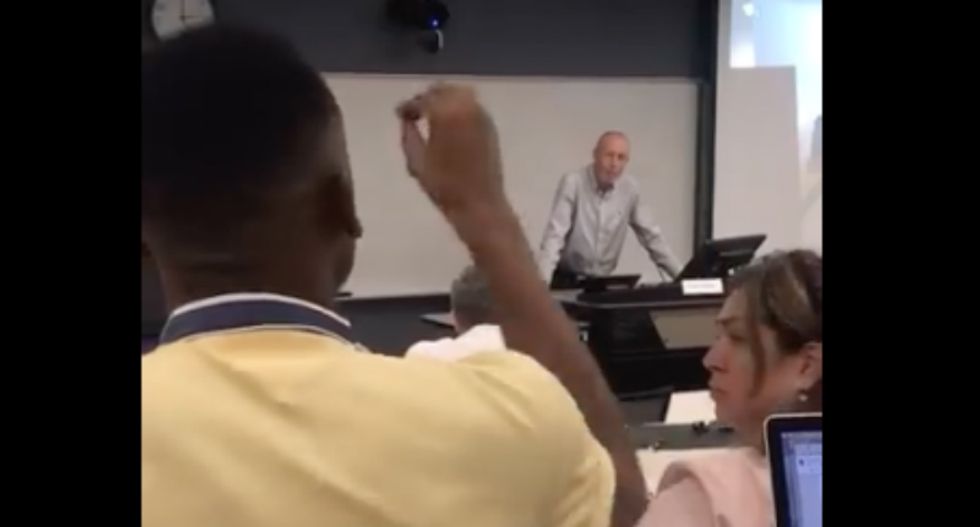 After activists outed Florida Atlantic University professor Marshall DeRosa for having written articles in defense of the Confederacy, being funded by the Koch brothers and formerly being a member of the "educational" arm of a white nationalist group, students confronted him during a faculty meeting — and all hell broke loose.

The Miami New-Times reported Wednesday that during the Monday faculty meeting, anti-racist student activists cited DeRosa's own writings, some as recent as 2017, that referenced controversial beliefs that include his assertion that slavery was a product of "black supremacy."

"I knew this would turn into an inquisition," the professor said as a student read aloud from an August 2017 article where he argued that "Confederate case law" proves that slavery was in fact spurred on by "black supremacy" in a clip published by the Abbeville Institute, a group "named after the birthplace of South Carolina slavery-defender John C. Calhoun," the New-Times noted.

"The tar-baby in any defense of the Confederacy is slavery, which has segued into 'white supremacy,'" DeRosa wrote in the clip read aloud by the student activist. "That issue will be addressed in subsequent Confederate case law. But for now, suffice it to say that linking the two, slavery with white supremacy, is a gross over-simplification. First, black supremacy is the origin of Southern slavery."

The crowd erupted as the student read the clip that used the slur "tar-baby" in an effort to take the onus of chattel slavery off of white American and European slavers — but DeRosa rebutted by asking if his assertion was "not true."

After claiming he doesn't care what students think of him, the professor insisted the exposure of his controversial writings puts his family "at risk." A student that the New-Times identified as a member of the Black Lives Matter Alliance of Broward County then addressed the professor directly.

"I want the faculty here to know that we employ someone with ties to white supremacist groups," the student said. "And if we do this, how can we say we are ethically, racially, politically diverse? I'm not attacking you, I'm attacking the people you are involved with, and if you are involved with these people, you need to stop that."

DeRosa responded by saying students are "peddlers of these untruths" and "smears" before turning on his fellow faculty members that he accused of "weaponizing" students and encouraging them to attack him.

Watch video of the explosive meeting below: