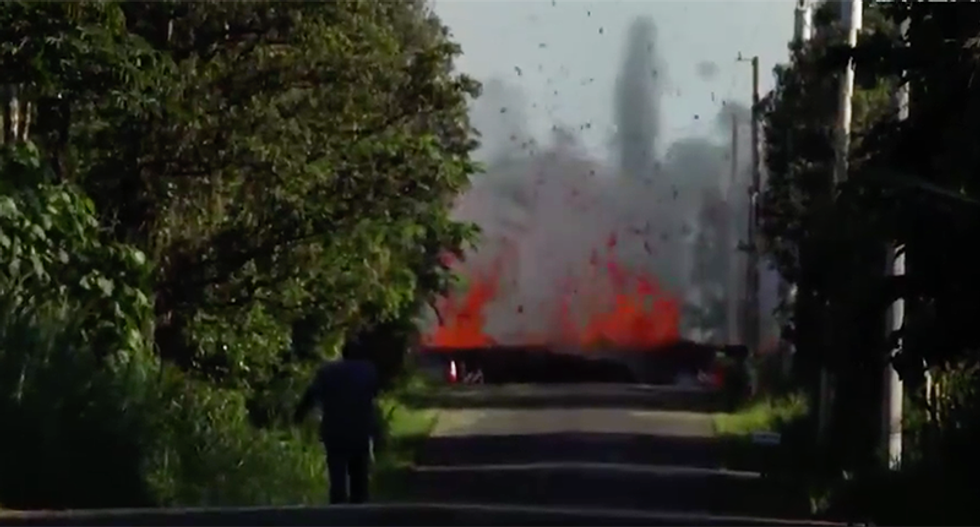 The Kilauea volcano has been erupting since 1983, so it isn't as if this was a sudden incident. However, what was unusual has been the rivers, pools and "fountains" of lava. The Los Angeles Times explained that the first major quake happened hours before the eruption began. Over 300 quakes have followed.

The cascade of incidents began Monday as lava that has been flowing out of Puu Ooo, a crater on the eastern shoulder of Kilauea. The crater worked as a kind of reservoir, holding back the lava as it came to the surface. It would then flow back underground and out to sea. Residents on the downside of the volcano haven't had to contend with problems since 2014, but this week the Puu Oo crater collapsed.

Since then, more and more earthquakes have shaken an already shaky situation throughout Thursday and Friday. Leilani Estates residents, who are approximately 25 miles from the volcano's highest point, reported surface cracks in the ground on Wednesday. Some said that they were even able to feel heat coming from the cracks. Thursday that lava began gushing out like a fountain. Evacuations have been underway since.

You can see some of the horrifying photos and videos posted by residents, USGS and local news crews below:

#BREAKING #LeilaniEstatesEruption: First look at the two homes that caught fire after a third eruption broke out at… https://t.co/HGohkmXPAC
— Mileka Lincoln (@Mileka Lincoln)1525455957.0

#BREAKING: Officials on the Big Island confirm that a third eruption has been reported in the Leilani Estates area,… https://t.co/QnPFSLEH1n
— Hawaii News Now (@Hawaii News Now)1525455102.0

BREAKING: Hawaii officials are preparing to activate warning sirens on the Big Island of Hawaii because of an activ… https://t.co/9l21SXOPFX
— David Begnaud (@David Begnaud)1525406443.0

And a bit of historic photography: