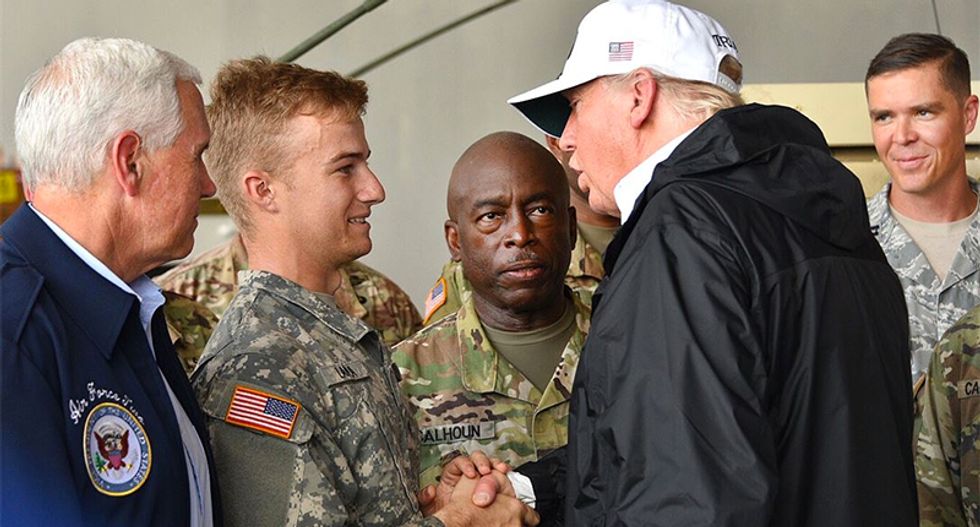 Memorial Day was the holiday meant to honor fallen soldiers, but somewhere along the line it has become a day that also honors all veterans. Regardless of whether the holiday is Memorial Day or Armistice Day, President Donald Trump is likely to mark the day claiming that he honors veterans who fought for America. It's an interesting tactic given his history disparaging veterans, attacking Gold Star families, mocking prisoners of war, getting into a public battle with the family of a soldier that had just been killed.

Then there are the broken promises for the Veterans Administration. That alone could make for an even longer list.

However, as the president celebrates fallen soldiers Monday, here are 10 of the times he did the opposite:

"He was a war hero because he was captured. I like people who weren't captured, OK?" Trump said at a 2016 campaign event.

A few days later Trump even doubled down on his remarks.

2. Trump goes after the Khan family for speaking out in support of Hillary Clinton at the Democratic convention.

"Go look at the graves of brave patriots who died defending the United States of America. You will see all faiths, genders, and ethnicities. You have sacrificed nothing — and no one," Khizr Khan said.

In the days that followed the statement, Trump went into full attack mode. He did everything from claim Khan's wife wasn't allowed to speak because she is a Muslim wife. He claimed he made sacrifices because he "created thousands and thousands of jobs, tens of thousands of jobs, built great structures." He even began spreading a conspiracy theory that came from some right-wing fever dream that Khan was secretly a "Muslim Brotherhood agent."

It's been almost two years and Trump has never apologized.

Trump got five draft deferments while Vietnam raged for nearly 20 years. Trump had bone spurs, though. While we've heard about his medication list, weight and other factors, the president's physician, and former nominee to chair the Veterans Administration, never gave a status update on the spurs that kept him out of serving his duty.

He didn't miss out, however. Trump said that his sex life was like his own personal Vietnam.

"I was dating lots and lots of women," he said in 2004. "I just had a great time. They were great years, but that was pre-AIDS, and you could do things in those days that today you're at risk doing. AIDS has changed a lot."

"It is a dangerous world out there — it's scary, like Vietnam," he continued. "It is my personal Vietnam. I feel like a great and very brave soldier."

4. Promise the moon but give them pennies.

Twice, Trump promised that he would be donating to veteran causes. The reality, however, was another story. While campaigning in 2016, Trump indicated that he had sent nearly $6 million to different veterans groups nationwide, but when Washington Post reporter David Fahrenthold called every veterans advocacy organizations to uncover who got what and how much, the donation was a little closer to nothing.

Despite making the claim for months, the money miraculously appeared to various organizations in the days that followed Fahrenthold's report and questions for Trump.

The families that lost their husbands or sons in the Niger ambush didn't get a call from the president for nearly two weeks. When the call finally came it was only after the president was blasted publicly in the press.

Except, when he called one family, he completely flubbed the call. Instead of taking the high road, Trump moved on to blast the family and a local Congresswoman and friend of the family who mentored the Sgt. La David Johnson.

If that isn't bad enough, when Trump was blasted for his behavior, he swore that he had done more for Gold Star families than anyone. He even went so far as to claim that former President Barack Obama never called the families. Not only was the claim false, families who had received that heartbreaking call stepped up to call out the lie.

Chris Baldridge's son was killed in June 2017 by an Afghan police officer. Over the phone, the president told Army Sgt. Dillon Baldridge's family how sorry he was. The father lamented how hard the family has struggled financially.

"He said, 'I'm going to write you a check out of my personal account for $25,000,' and I was just floored," Baldridge told the Washington Post in an interview. "I could not believe he was saying that, and I wish I had it recorded because the man did say this. He said, 'No other president has ever done something like this,' but he said, 'I'm going to do it.'"

The interview took place five months after the promise. The check hadn't arrived. After a public outcry at another Trump lie, the White House told The Post "The check has been sent." Better late than never.

Everything was supposed to change. Finally, the White House would have an advocate for the veterans, Trump claimed in 2016. But, his promises haven't proved much in terms of action.

One thing Trump said he would change are the wait times at the VA. During at least two events in 2017, Trump swore he'd fixed it.

"I used to go around and talk about the veterans and they'd stand in line for nine days, seven days, four days... 15 days. People that could have been given a prescription and been better right away end up dying waiting in line," he said during a July speech. "That's not happening anymore."

"Now [veterans] go right outside, they go to a doctor in the area, we pay the bill, and it's the least expensive thing we can do and we save everybody's life and everybody's happy," the president claimed.

7. The backlog in veteran disability claims

Trump signed the Veterans Appeals Improvement and Modernization Act of 2017 in August, saying that they were working to streamline disability compensation appeal claims for veterans.

It's great for new vets applying for disability. For those who were stuck in the system, the wait continues as the legislation did nothing to reduce or address the current backlog or address appeals after denials. There are over 470,000 veterans stuck in the backlog. Former VA Secretary David Shulkin said that it would take $800 million and 10 years to clear the backlog of appeals.

8. VA's Veterans Choice Program emergency funding ran out before it was supposed to.

Someone didn't do their math correctly. When Congress passed and Trump signed the $2.1 billion in emergency funding for the VA's Veterans Choice Program, it was supposed to keep the program afloat until February 2018. It ran out two months early.

Like many Republicans, Trump wanted to stop government from hiring new people, so he placed a freeze on any agencies bringing in new staff. For veterans looking for jobs at the Pentagon, in the social services or anywhere in government, they were locked out. While many might think it's a small number, in 2015 The Hill reported that one-third of those applying for federal government jobs were veterans.

For understaffed agencies like the VA, the hiring freeze only made things worse.

The Trump White House lacks a basic understanding of the daily life those coming home from war and being discharged face. When Republicans sought to cut food stamps, they seemed to forget 1.5 million veterans use food stamps. Data on active-duty soldiers isn't available because the Pentagon doesn't share it. In 2013, however, 23,000 active-duty troops used food stamps.

"Veteran-specific benefits and services fall short of meeting the needs of veterans and their families, many of whom struggle to meet basic needs even with Department of Veterans Affairs (VA) supports," the Center for American progress reported in 2017. "More than 3.9 million veterans live paycheck to paycheck—meaning their family incomes are less than twice the federal poverty level, or less than $50,000 for a family of four."

So, if the president touts his "many successes" that show how he has "done more for veterans than any president in the history of the world," Americans can remind him what he has really done.