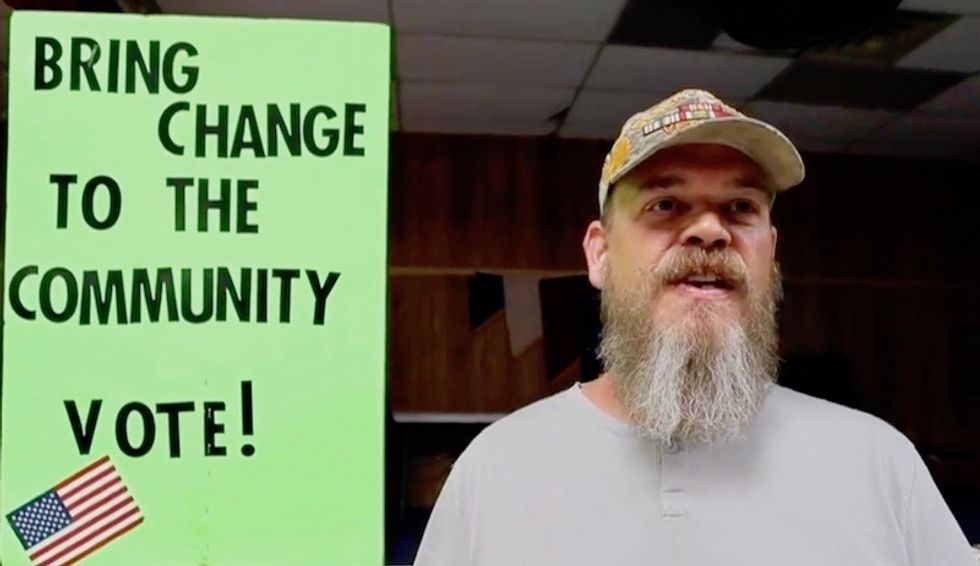 Mineral Wells, Texas has had a long, steady decline. The average income in the hardscrabble town west of Dallas is only about two-thirds of the state average, and the downtown has been hollowed out by a Walmart and local employers bailing on it. Locals call it "Miserable Wells," and barely ever bother to vote.

All that misery has fermented into an armed citizens revolt thanks to a Facebook group, reports the Fort Worth Star-Telegram.

Mineral Wells has had the same leadership for a quarter century, which locals call "the good ol' boy" city government. When those leaders asked for $6 million to build a new city hall, angry citizens started a Facebook group called "We the People of Mineral Wells," where citizens could vent. And when that group pushed its most extreme members off because the admins "weren't keen on some language and tactics being used" they splintered off into another group, "We The People UNCENSORED!!!"

The new group has organized open-carry marches where men carried AR-15s as they marched around City Hall and targeted supporters of Bill Jones, a disgraced former game warden running for Justice of the Peace, by threatening to make a list of everyone who had one of his signs in their yards.

"When you start talking about putting people on a list and you're walking around with dadgum AR-15s, what does that mean?" said Jones, who has been accused of molesting his step-daughter and who later had a relationship with a subordinate.

Jones, the accused molester, says he's scared the insurrectionists may burn his house down—and that his supporters are equally scared.

"They're scared of these people because they think they are going to get shot and killed out of this deal," Jones said. "I'm not so sure that if I win I'm not going to have an attempt on my life. Every time I come home and my house isn't on fire, I think it's a good day. That's how these people act."

The group is hoping to take the town over in the May 5 election.

"You don’t spend $6 million on a City Hall building when you can’t drive down the streets of town and 28 percent of your people live at or below the poverty level," said Terri Glidewell, a first-time city council candidate and group member. "This is a minimum-wage town."

After the group was covered by the Star-Telegram, others in "Miserable Wells" criticized them for making the town look bad.

"Good job you Hillbillies.lmao," wrote one.

"I’m going to say this and I’m sure I’ll get a lot of backlash! BUT WHAT THE HELL IS WRONG WITH ALL OF YOU!? Seriously ! All this name calling, insinuations, accusations, and calling people out on truly petty shit. Trying to make each other look bad. Trying to push the buck onto others when we as a community have failed MW by not voting in the past. By not standing strong. By waiting around for someone else to do it. You are all looking like a bunch of damn fools!," wrote another.

Watch a short video on the group from the Star-Telegram below.