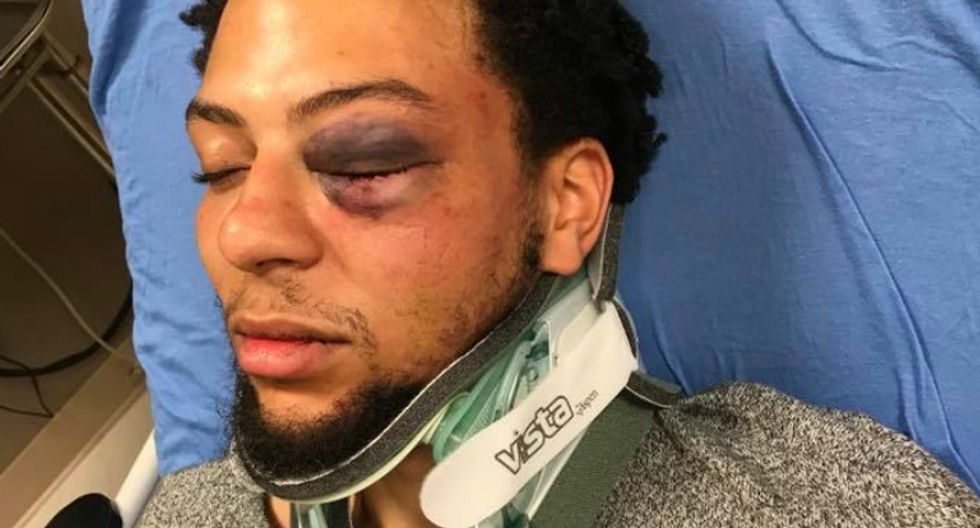 A Texas man is accusing security guards at a Dallas strip club of beating him up and calling him racial slurs as he was leaving the bar following a confrontation on Cinco de Mayo.

The Dallas Morning News reported that Plano resident Jalen Bell, who on Facebook identified himself as a retired Navy veteran, made a public post about the May 5 incident at XTC Cabaret that left him with a bruised face and broken ribs.

In his post, Bell wrote that he and a friend decided to leave the club following a mild argument with a man who put his cigarette out in his drink when he accidentally left it in a VIP area. As they were exiting, however, the group of white security guards were allegedly waiting for them and "punched, stomped and grabbed my throat with such force I felt my trachea beginning to snap." During the beating, the veteran alleged that the guards called him a "n*gger."

"Without any provocation at all they beat us both like animals," Bell wrote. "After they were done they just kicked us out and went on with business as usual."

It remains unclear whether Bell filed a police report about the incident at the XTC Cabaret, a club that's made headlines for violence in the past two years.

The Morning News noted in the post, Bell lists lawyer Lee Merritt — an attorney who "is also representing a young woman who accused singer R. Kelly of luring her into an alleged sex cult and transmitting an STD to her in Dallas" — as his counsel in the matter.

"I am a U.S. Navy Veteran and I understand sometimes people do terrible things for no reason at all," Bell wrote. "But we live in a country of laws. These men attacked me and my friend because they could. We were black and vulnerable and they don’t believe that the law will have any consequences for them."