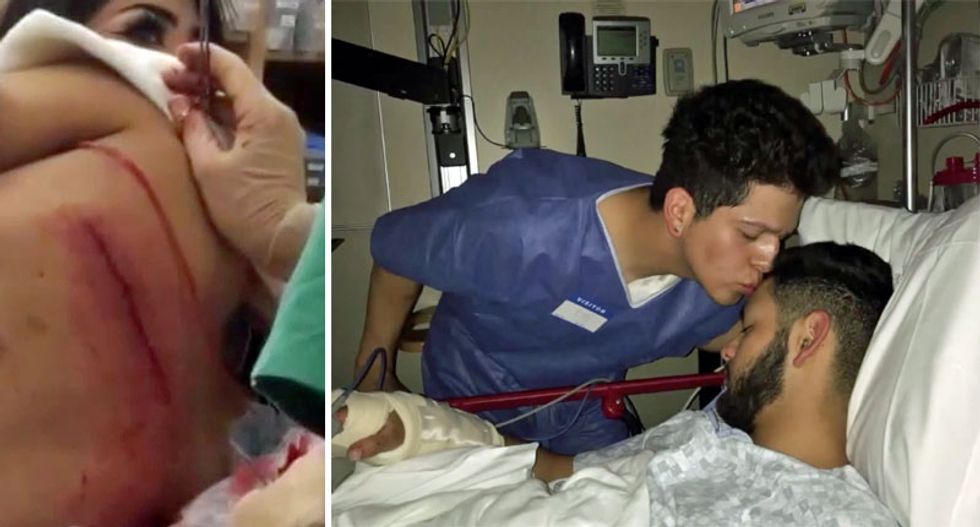 Knife slash marks across the back of Gabriel Roman, and a kiss on the forehead from his boyfriend, Christopher Huizar as he recovered in the hospital.

A Denver man feared his boyfriend would bleed to death in the parking lot of a local 7-Eleven after a stabbing attack by a man shouting homophobic slurs, KDVR TV reports.

The couple were holding hands as they walked home from a nightclub. Only a few blocks from their home they were accosted by anti-LGBT slurs and were then slashed with a knife.

"We were simply holding hands when a white male yells 'f*cken f****ts' and comes running up behind and stabbed me in the neck & my boyfriend got stabbed in his hand and his back," Christopher Huizar wrote on a Go Fund Me page. "We were just holding hands minding our business."

They ran from the assailant and collapsed in the parking lot of a local 7-Eleven store.

"I'm thinking, like, my boyfriend is going to die," Huizar told KDVR.

His boyfriend, Gabriel Roman, was bleeding profusely from his hand.

"I just remember looking at him and telling him it's going to be OK," Huizar recounted.

Denver Police have a suspect in custody and say the investigation is ongoing.

"It’s way deeper than just the physical damage," Roman noted. "Of course, we’re relieved this guy is caught or whatever, but there’s still that fright, I guess you could say to, 'who else is out there like that?'"

Graphic video of their injuries was posted on Facebook.

"It’s not going to stop me from being who I am or showing affection to my significant other," Roman told KDVR. "But I will definitely be more cautious."

“Just seeing him in my arms bleeding," Huizar, choking up, told 9 News. "I just didn't want him to die.”