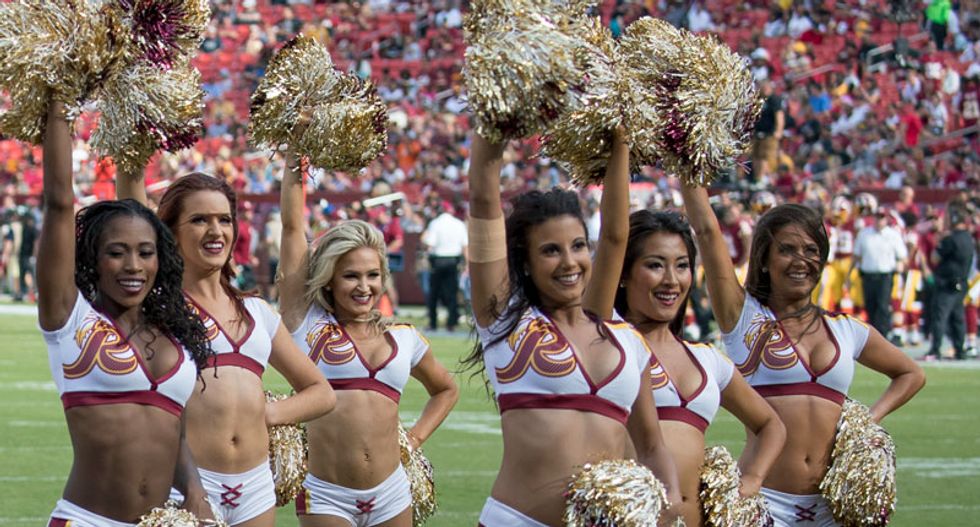 Cheerleaders for the Washington football team, photo by Keith Allison.

The reckoning of the #MeToo era is exposing horrific workplace issues in yet another industry, as The New York Times reports on shocking allegations against the Washington football team cheerleaders.

The report details how team sponsors and FedExField box suite holders "picked" members of the cheer squad to be "personal escorts at a nightclub" during a 2013 calendar photo shoot at the Occidental Grand Papagayo resort in Costa Rica.

Upon arrival at the adults-only resort on Culebra Bay, team officials collected the passports of the cheerleaders.

The sponsors and box suite were also reportedly "granted up-close" access to cheerleaders required to be topless or wearing nothing but body paint.

“At one of my friend’s shoots, we were basically standing around her like a human barricade because she was basically naked, so we could keep the guys from seeing her,” one cheerleaders recalled. “I was getting so angry that the guys on the trip were skeezing around in the background.”

After one 14-hour day, the squad's director told nine of the women they had been picked to work that night as escorts.

“So get back to your room and get ready,” they were told, as several of the women began to cry.

“They weren’t putting a gun to our heads, but it was mandatory for us to go,” one of the cheerleaders said. “We weren’t asked, we were told."

The cheerleaders told The Times the arrangement amounted to "pimping us out."

“It’s just not right to send cheerleaders out with strange men when some of the girls clearly don’t want to go,” one cheerleader who was there said. “But unfortunately, I feel like it won’t change until something terrible happens, like a girl is assaulted in some way, or raped. I think teams will start paying attention to this only when it’s too late.”

“The issue was that management seemed to condone all of this,” one cheerleader explained.

Upon leaving the club, hours after midnight, the woman were stopped by police officers who asked to see their passports -- which were in possession of the team.

“I guess they thought you were prostitutes,” observed a man affiliated with the squad.

The Washington football team is denying the characterization of the trip.

“The Redskins’ cheerleader program is one of the NFL’s premier teams in participation, professionalism, and community service. Each Redskin cheerleader is contractually protected to ensure a safe and constructive environment," the team said in a statement. "The work our cheerleaders do in our community, visiting our troops abroad, and supporting our team on the field is something the Redskins organization and our fans take great pride in.”

But several women left the cheer squad after the Costa Rica trip, for which the cheerleaders were not compensated beyond transportation, meals and lodging.

“You kept telling yourself that it was going to get better,” one woman who left explained. “But it never got better. Finally, I had to admit to myself, this is not what I thought it would be.”