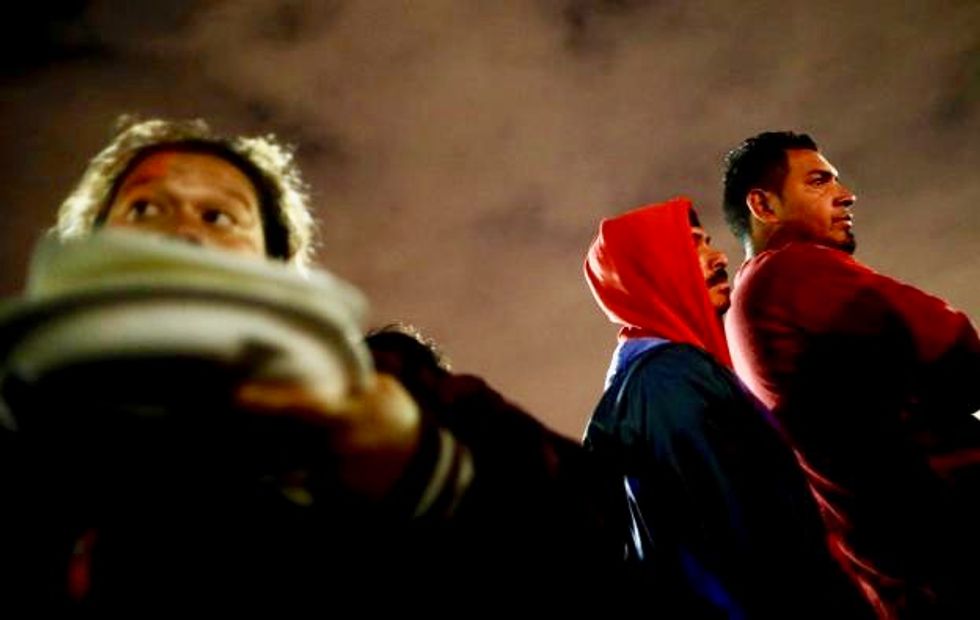 People traveling with a caravan of migrants from Central America line up for eat at a camp near the San Ysidro checkpoint, after U.S. border authorities allowed the first small group of women and children entry from Mexico on Monday night, in Tijuana, Mexico May 1, 2018. REUTERS/Edgard Garrido

Dozens of Hondurans, Guatemalans and Salvadorans slept a third night outside a U.S. port of entry, hoping to join the first 25 companions let across to seek asylum after traveling in a caravan across Mexico that has angered President Donald Trump.

Since Monday, border officials have allowed three small groups from the caravan to cross the U.S. border, saying that the busy San Ysidro crossing to San Diego is saturated and the rest must wait their turn.

More than 100 members of the caravan were camped in a square near the entrance of the San Ysidro pedestrian bridge that leads from Mexico to the United States, waiting for their turn to enter the facility.

Late on Tuesday, about 30 migrants, who had been next on the list, most of them women, children and transgender people, anxiously filed through the walkway to the U.S. gate.

Two by two, some walked up to a U.S. Customs and Border Protection officer standing in the gate to ask if they might pass through.

First to try was a man and his small nephew, a football under his arm; then a mother and child; then a women with her grandsons.

Turned away, they bedded down in a small space pressed up against metal bars separating them from the United States, bundled against the cold under blankets and sheets of tarpaulin tenting.

No one knew when, or how many of them, would next be allowed through.

Among them was Reina Isabel Rodriguez, who had fled Honduras with her grandsons. Throughout the caravan’s 2,000-mile odyssey from southern Mexico, the possibility that U.S. officials might reject her plea for asylum, and of being separated from the boys for not being their biological parent, had never seemed so real.

“I’m scared, I’m so scared, I don’t want to be sent home,” she said, tears streaming down her face. Christopher, 11, watched her with anguish, and Anderson, 7, sat at her feet, his head drooping, a toy robot in his lap.

Rodriguez was among the many migrants of the caravan who told Reuters they were forced from their homes by Central America’s brutal Mara street gangs, along with other life-threatening situations.

Trump’s administration, however, cites a more than tenfold rise in asylum claims in the past seven years, growing numbers of families and children and a shift to more Central Americans as signs that people are fraudulently taking advantage of the system.

Trump wants to tighten U.S. law to make it harder for people to claim asylum. For now though, despite his orders to keep such migrant caravans out of the country, international and U.S. law obliges the government to listen to people’s stories and decide if they deserve shelter.

The U.S. Department of Justice said on Monday it launched prosecutions against 11 “suspected” caravan members on charges of crossing the border illegally.

About half of them are represented by the federal public defender in San Diego, according to the office’s chief trial attorney Shereen Charlick, including three women who had planned to present themselves and their children to make asylum claims at the official border port of entry.

Long lines at the entry point led the women and their children to try crossing a few miles away, she said, where they were apprehended by immigration authorities. Defense lawyers are trying to track down the location of their children, Charlick said.

She said some of the mothers apprehended are no longer with their children, and that lawyers in the office are trying to figure out how they were separated.

Nicole Ramos, an attorney advising caravan members in Mexico, said she did not believe the individuals facing U.S. criminal charges were part of the caravan group.

“Quite a few people have claimed to be part of the caravan, including a sizeable contingent of Guatemalan men who were never part,” Ramos said.