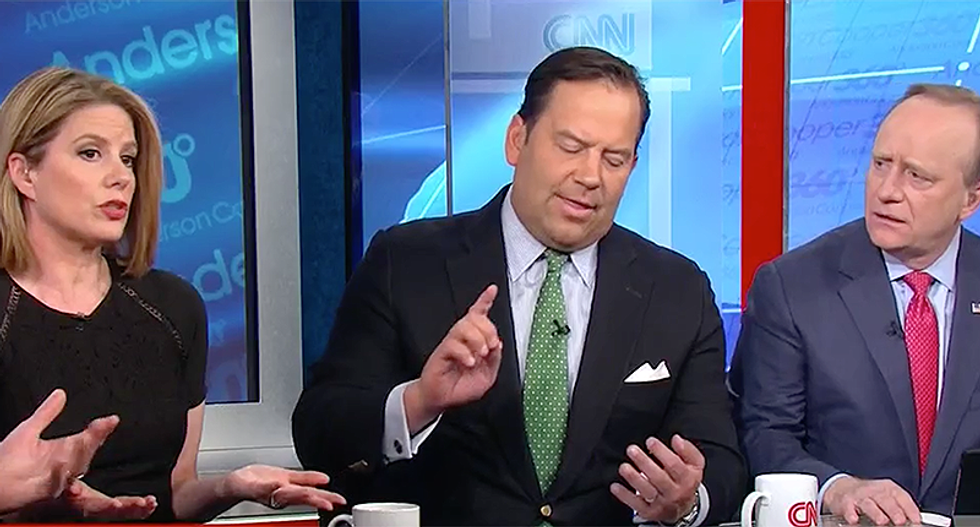 But when Trump ally Steve Cortes claimed that the Russians wasted their money hiring Cohen, the panel did everything from rolling their eyes, to laughing, to questioning how he could possibly draw that conclusion.

Cortes claimed that because Trump recently instituted sanctions against Russia and expelled diplomats it proves he wasn't under the thumb of Russian President Vladimir Putin. He did not have an excuse for why those sanctions and expulsions took more than a year to institute or why Trump continues to refute Russia's involvement in the election.

"They got no investigation into the hacking," said panelist Kirsten Powers.

"It didn't matter. He was selling a false bill of goods, because swamp tactics are done in this White House," Cortes claimed. "We now have a citizen president, someone with no with no government experience before. A mogul who can't be bought and wasn't bought even though perhaps his personal attorney tried to sell him."

"Well, he sure can be rented," quipped Democratic strategist Paul Begala.

"Well, then why would Russia--" Cortes tried to respond before Begala cut in again.

"Just a minute. You gave your commercial, let me give some facts," Begala said. "This Russian-connected company gave a $500,000, not really to Michael Cohen but a limited liability corporation he set up called Central Consultants. He told us it was set up to pay Stormy Daniels hush money. Now, if in fact, others are reimbursing Mr. Cohen that, like Russians reimbursing it, what they are getting is leverage on our president."

Begala went on to say that Trump, since the beginning, seemed compromised by Putin.

However, Cortes cut in to claim that Russians haven't done anything to help Trump. It devolved into chaos from there.