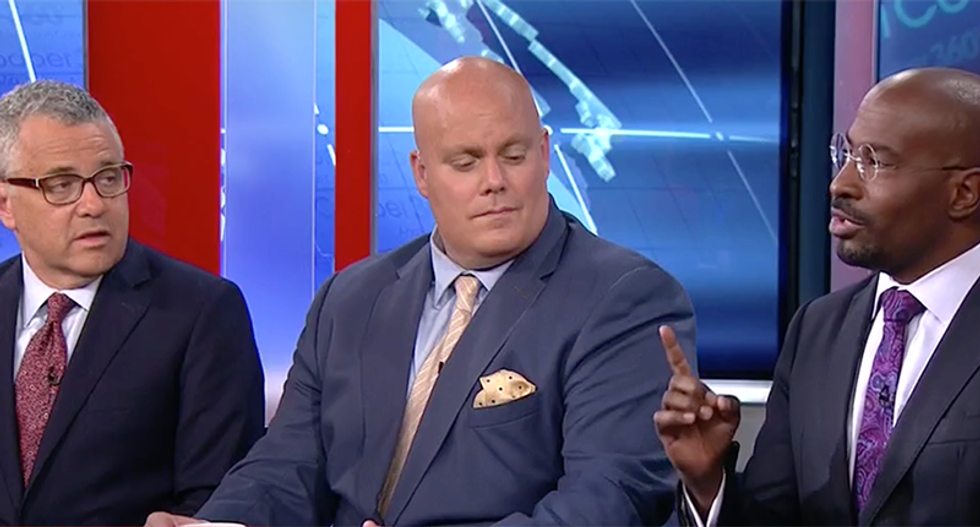 President Donald Trump and his defenders have claimed that as the president he has the power to hire and fire whomever he wishes whenever he wishes.

In a CNN panel discussion, conservative commentator Scott Jennings, whose LinkedIn profile does not say he attended law school, explained this reasoning comes from the three-word "bottom line" that justifies everything: "Because I can." Jennings explained that as president, Trump has no obligation to justify any hiring or firing decisions to the American people. He cited a 1968 law that claimed the president has that ability specifically with the FBI director.

"So, you think he can fire him if someone gives him a suitcase full of cash to fire him, that would be OK?" asked CNN legal analyst Jeff Toobin.

Jennings said "of course not," claiming that when it comes to the FBI director, however, the president has the ability to hire and fire as he sees fit.

"No you don't," the Harvard Law graduate broke in. "No you don't. Because the president is not allowed to act out of a corrupt motive, in firing someone who is investigating him. I mean, this is the key issue here, and that's why what [Rudy] Giuliani said yesterday was not an explanation, it was a confession. It was Giuliani saying, 'The reason he fired him is that he wouldn't exculpate the man who fired him. "

"So, you're saying that you believe that the 1968 law about hiring and firing the FBI director can be interrupted by certain issues?" Jennings asked.

Jennings asked if Toobin knew for a fact there was corruption, but Toobin said that the the investigation is about that.

Lawyer and democratic strategist Van Jones said that he's done employment law in the past and he knows that "at will" employees can be fired for whatever reason the employer decides.

"But not an illegal reason," he qualified. "So, you can't fire someone just because they're a woman" or for someone's race or other reasons that are illegal. "I think that's what we're dealing with here. If you have a corrupt motive, you're firing someone to conceal a crime, you can still get in trouble."

Democratic commentator Maria Cardona explained that the retrospective of all of the reasons that Trump has given for firing former FBI Director James Comey is all the evidence that anyone needs.

"There is clearly not an innocent reason that he did that," she said. "Because you wouldn't have to be making up different reasons as to why you did something. If you did it on the up and up."