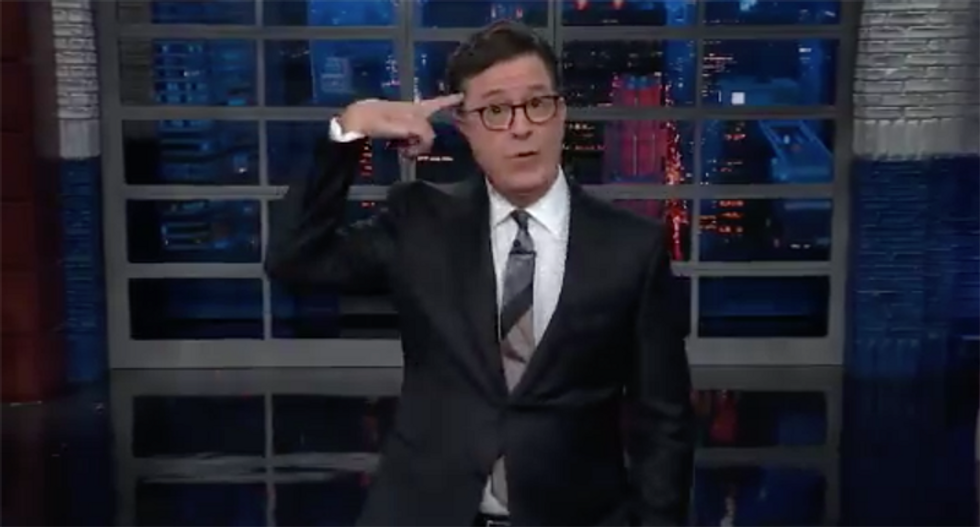 Sen. John McCain (R-AZ) is fighting a rare form of brain cancer that has already claimed the lives of political leaders like former Delaware Attorney General Beau Biden and former Sen. Ted Kennedy (D-MA). But, Stephen Colbert is holding out hope for the veteran, who withstood over five years of torture in a POW camp in North Vietnam. The top White House aide who attacked him, however, he's not so sure about.

White House aide, "and flight attendant telling you to get back to coach," Kelly Sadler said that McCain's vote on Trump's CIA nominee wouldn't matter, because "he's dying anyway," Colbert recalled for his audience, which promptly booed her.

"Kelly, you don't know that for sure," Colbert explained. "Medical science can do wonders. Though, sadly for you, there's no cure for assh*le."

He went on to say that she could always just stitch it up. The CBS host observed too that the White House seems more bothered by the leak than the statement.

"Sources say a visibly angry Sarah Huckabee Sanders told her team, 'I am sure this conversation is going to leak, too. And that's just disgusting,'" Colbert continued, citing news reports."Well, if you're so sure it's going to leak, maybe leak something nice. 'We are instituting a casual Friday policy all summer,' and 'I brought bagels for everyone. Gee, I hope it doesn't leak what a fun, nice boss i am!'"

Colbert said the Trump White House is so leaky "there are even leaks about why they're leaking. One leaker leaks: 'To be honest, it probably falls into a couple of categories: The first is personal vendettas. And two is to make sure there's an accurate record of what's really going on in the White House.' Oh, there's already an accurate record of what's going on in the White House. It's called 'boss baby.'"

Watch the Colbert opener below: