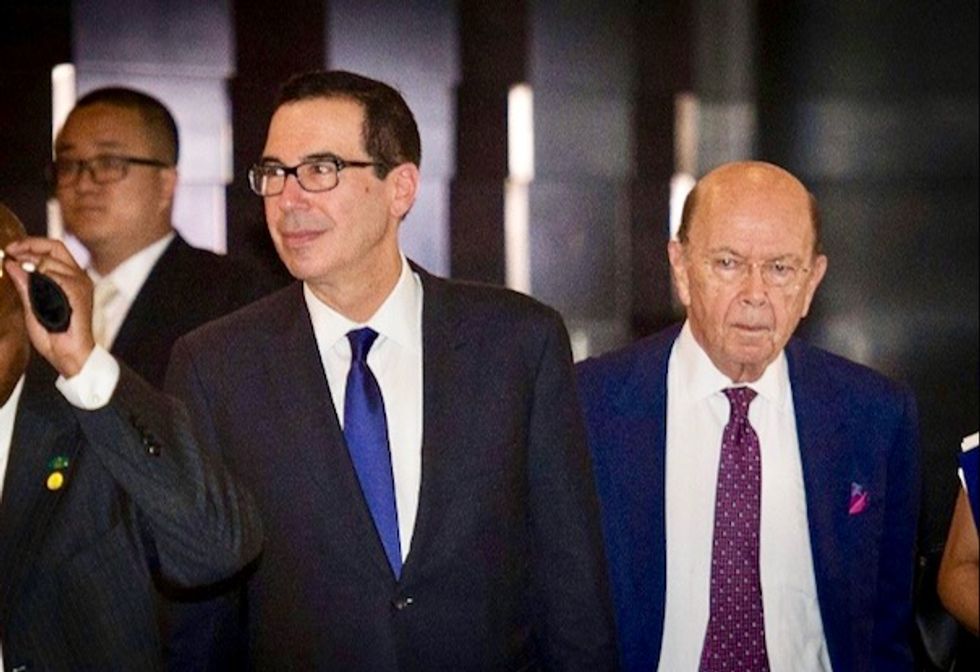 Senior Chinese and US officials met in Beijing Friday for a second day of high-stakes talks aimed at forestalling the growing momentum towards a trade war that could trigger billions of dollars of tariffs.

The discussions mark a potential off ramp for the trade conflict that could dent humming global economic growth.

US President Donald Trump has threatened to levy new tariffs on $150 billion of Chinese imports while Beijing shot back with a list of $50 billion in targeted US goods.

The US and China are having "very good conversations", Treasury Secretary Steven Mnuchin told reporters before leaving his hotel Friday morning for the Diaoyutai state guest house, where the talks are being held.

However, officials declined to give details of the discussions.

"I have to get on this elevator and not talk to reporters," White House advisor and noted China hawk Peter Navarro told an AFP reporter at his hotel.

During an event in Washington, US Vice President Mike Pence's economic advisor Mark Calabria said the first day of talks had been "fairly positive", according to Bloomberg News.

The US has given China a "detailed list of asks", he said, adding that Washington wants Beijing to lower tariffs to match the American level.

Trump has made reciprocity a key demand in negotiations with China.

"The difficulty will always be that we will most of the time hear pretty positive things from China and the question is whether they will actually do them," Calabria said.

Liu He, vice premier in charge of the economy, is leading the discussions for China.

Known as President Xi Jinping's right hand man on economic matters, Liu was noticeably absent from Xi's speech Friday morning commemorating the birth of Karl Marx and the continued relevance of his theories to China, which he delivered to a full audience in the Great Hall of the People.

China's state media showed little optimism that the trade talks would bring a breakthrough, suggesting that the best case scenario would be a further deterioration in the current situation.

"If the two sides do not strike a deal, and they merely agree to keep talking, we ought to consider that a positive outcome," said an editorial in the state-run China Daily.

"Let us hope that the US delegation has come with the willingness to talk sincerely rather than with the design to cause injury."

The talks may receive some tailwinds from the latest trade data out of Washington, showing the US global trade deficit had narrowed in March

The goods deficit with China fell 11.5 percent from February to $25.8 billion, but analysts cautioned seasonal factors like China's New Year holidays were likely at play.

Bilateral trade in coming months could be hurt by US and Chinese buyers planning to avoid tariffs, with news this week that China may already be downsizing its soybean imports from the US.

"They're buying beans in Canada, in Brazil, mostly Brazil, but very deliberately not buying anything from the US," Bunge said in the interview with Bloomberg News on Wednesday.

Soybeans were China's largest import from the US last year, worth $14 billion.