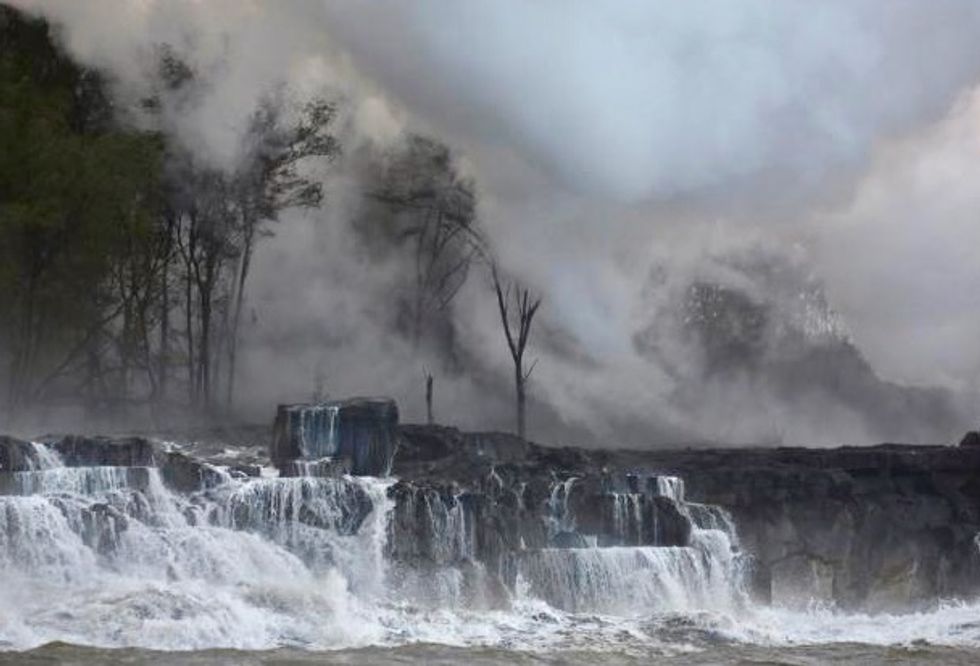 Steam and volcanic gases rise as lava flows into the Pacific Ocean southeast of Pahoa during ongoing eruptions of the Kilauea Volcano in Hawaii, U.S., May 20, 2018. REUTERS/Terray Sylvester

Deadly white clouds of acid and fine shards of glass boiled into the sky over Hawaii on Monday as lava from the Kilauea volcano flowed into the ocean, creating a new hazard from a more than two-week eruption.

Hawaii’s Civil Defense agency warned motorists, boaters and beachgoers to beware of toxic clouds of so-called “laze” — a combination of “lava” and “haze” — which formed as two streams of hot lava poured into sea water.

The caustic plume, which can be fatal if inhaled, was the latest danger in an eruption that shows no signs of stopping, Since it started on May 3. It has already produced around two dozen lava-spewing cracks, the same number as a previous 88-day event in 1955.

The eruption has entered a more violent phase, in which large volumes of rich, orange molten rock, hotter and faster than older magma, are streaming out of fissures in the ground that have erupted around a small area of rural communities.

“We’ve seen Phase 1. We’ve seen the clearing out of the system. We call that the ‘throat-clearing’ phase,” Carolyn Pearcheta, operational geologist at the Hawaiian Volcano Observatory, told reporters on a conference call.

Lava has destroyed at least 44 homes and other structures in the Leilani Estates and Laipuna Gardens area of the Puna district.

A “lava bomb”, a plate-sized chunk of lava that flew horizontally out of a fissure, seriously injured one man on Saturday.

Two thousand people have been ordered from their homes due to lava flows and toxic sulfur dioxide gas, levels of which have tripled in the last two days, according to the County of Hawaii Civil Defense. Hawaii National Guard has warned of more mandatory evacuations if further highways are blocked.

Flows of molten rock are traveling at around 400 yards (meters) per hour, twice as fast as earlier streams, Pearcheta said. Lava is expected to begin sending fountains of lava up to 600 feet (183 meters) into the air, three times as high as before, she added.

The new laze threat, which killed two people when a lava flow reached the coast in 2000, is a mix of hydrochloric acid fumes, steam and fine volcanic glass specks created when erupting lava, which can reach 2,000 degrees Fahrenheit (1,093 degrees Celsius), reacts with sea water.

The cloud could extend as far as 15 miles (24 km), mostly along the coast and offshore, geologists said on Sunday. Even a wisp can cause eye and respiratory irritation, and it causes acid rain that has corrosive properties equivalent to diluted battery acid, the U.S. Geological Survey said.

An air quality index for Kona, about 40 miles (64 km) northwest of the eruption site, was at “orange,” meaning older individuals and those with lung problems could be affected.