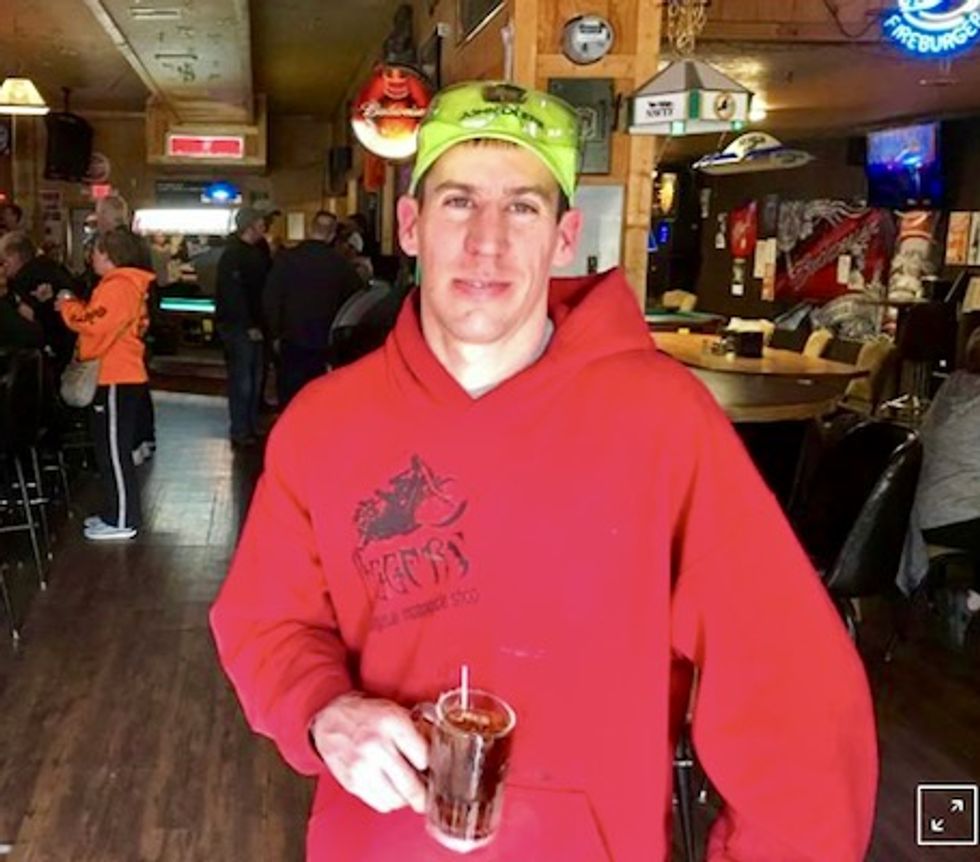 Jesse Oberbroeckling, a member of the United Auto Workers union who works at a John Deere factory has a drink in Knicker's Saloon in Dubuque, Iowa, U.S. March 29, 2018. REUTERS/Tim Reid

Inside Knicker’s Saloon, a factory worker hangout here, Jesse Oberbroeckling has just finished his shift at the John Deere plant when he reveals his regret.

Like many union workers, Oberbroeckling voted twice for former Democratic President Barack Obama before backing Donald Trump and other Republicans in 2016.

Now he has buyer’s remorse - and plans to support the Democratic challenger to Rod Blum, the Republican congressman in this blue-collar, eastern Iowa district.

“Trump is for the rich,” said Oberbroeckling, 37, sipping a rum-and-coke. “Blum’s for big business. They said they were for the workers, but they’re not.”

That sentiment should encourage Democrats, who saw their once-reliable labor vote help send Trump to the White House after he vowed to revive Rust Belt factories with trade tariffs and ailing coal mines with environmental deregulation. Now - with coal still struggling and Trump stoking a trade war - many union workers have soured on the president ahead of November’s midterm congressional elections, the Reuters/Ipsos opinion poll shows.

Between March 2017 and March 2018, union members’ approval of Trump fell 15 points, to 47 percent. In more than two dozen interviews with union members, many blasted Trump’s tax cut, arguing most of the benefits will flow to corporations and wealthy people.

A loose coalition of union leaders, Democratic strategists and political action committees (PACs) aims to seize on that shift by directing money and campaign workers to about 30 competitive races union-heavy districts. The party needs to gain 23 seats to retake the U.S. House of Representatives.

But falling support for Trump is no guarantee Democrats can restore the party’s historic dominance of the union vote. Nearly half of members polled still approve of the president, and their support for congressional Democrats has declined slightly from two years ago.

Forty-seven percent of union members polled would support a Democratic candidate in November; 34 percent favored a Republican. That compares to 51 percent favoring Democrats and 29 percent supporting Republicans in March 2016.

The 2018 poll was conducted online, in English, and included more than 1,400 union workers nationwide. It has a credibility interval of 3 percentage points, meaning results could vary in either direction by that amount.

Union membership has fallen by half since the early 1980s, to 10.7 percent of U.S. workers last year. But members can still sway close elections because they are concentrated in specific regions and vote at high rates. In the 2014 midterms, 52 percent of union workers voted, compared to 39 percent of others, according to a study by Demos, a liberal think tank.

“If we don’t win them back, we will never win here,” said Abby Finkenauer, the leading Democrat challenging Blum in Iowa’s 1st District.

Blum’s campaign did not respond to requests for comment.

Democratic strategists are targeting blue-collar enclaves of the Midwest, along with districts covering California farmlands, New York industry towns and Montana wilderness. They aim to trash the Republican tax cut, along with Trump’s failure to back a minimum wage and his attempt to repeal Obamacare.

In Iowa’s 1st District, dotted with farms and factories, Finkenauer tells audiences at union halls that her father was a union pipefitter-welder and that only a Democrat can improve their wages, health care and pensions.

Ford O’Connell - a Republican strategist who was among the first to highlight how voter anger could propel Trump’s candidacy - said the party will appeal to union voters with his tariffs against China, anti-immigration efforts and the tax cut they argue helps all workers.

Democrats counter they are already recapturing labor votes, citing the March special election victory in Pennsylvania by Conor Lamb, who beat an outspoken opponent of unions. Trump won the same district in 2016.

In interviews with Reuters, union members criticized the tax cut, along with Republican moves in some states - including Iowa - to curtail collective bargaining by public employees. And while Trump’s tough trade talk attracted many union workers to his campaign, some now worry his policies may protect some blue-collar jobs at the expense of others. Trump’s steel tariffs, for instance, could raise prices for the raw material used in factories supporting union jobs.

“Now I see he’s not going to do anything,” said Jones, of Oklahoma, who plans to vote Democratic this fall. “The working man don’t get nothing out of it. I never voted Republican until Trump, and it was the worst mistake I ever made.”

Other union members, however, continued to praise Republicans.

“The economy is doing better,” said Otis Evans, 47, of the United Auto Workers in Michigan. “Trump’s straightforward and candid.”

Clinton won 8 percent more of the union vote than Trump, according to polling of union members by the American Federation of Labor and Congress of Industrial Organizations (AFL-CIO).

That’s 10 percent less than Obama won in 2012 and a drastic drop from the more than 30-point advantage among union households that her husband, President Bill Clinton, enjoyed in 1992. In interviews, many union members cited a distrust of Hillary Clinton personally, rather than her specific policies, as one reason they backed Trump.

Those unions donated nothing to Republicans that year, the analysis showed.

This year, the AFL-CIO will deploy campaign workers and political donations in 31 union-heavy congressional districts, along with a wider array of races in 14 battleground states.

The organization has revamped how it gauges its political effectiveness, said organizing director Julie Greene. In addition to traditional measures like tracking phone calls and door knocks, it will analyze qualitative data, such as the length and substance of member-to-member conversations.

The DCCC is sending organizers to three dozen House districts, where they are partnering with representatives of the two-million-member SEIU to emphasize labor issues in those campaigns.

Guy Cecil, president of Priorities USA Action, a Democratic “super PAC,” said it will finance Democrats in seven states. It is the first time the group, founded in 2011 to support Obama, has waded into midterm elections.

All these efforts are designed to prevent a repeat of 2016, said Steve Rosenthal, the AFL-CIO’s former political director and now a political consultant.

“There was a collapse of union support,” he said.