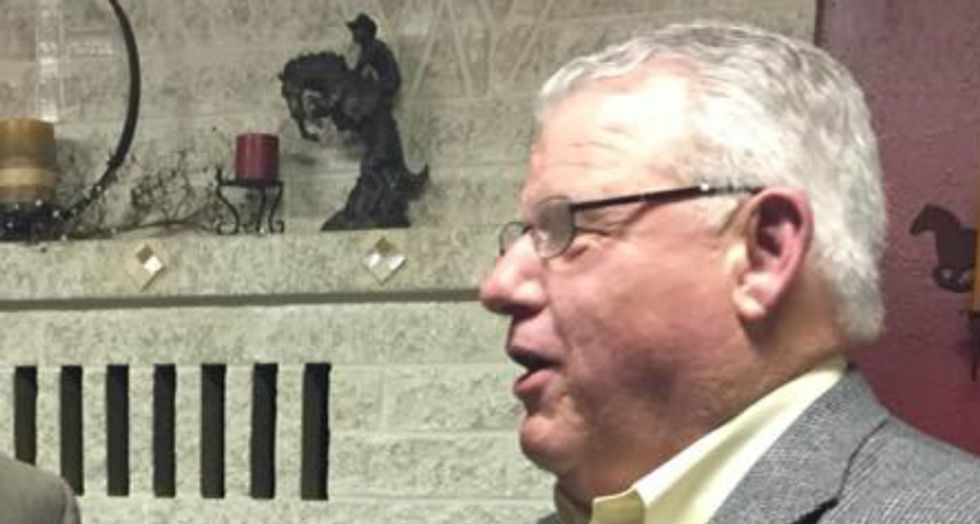 After accusing a local high school of promoting "destructive" homosexuality, a former GOP leader in Wyoming has been suspended from his job at a talk radio station.

The Casper Star-Tribune reported that Wind River News Network host John Birbari — a former chairman of the Fremont County Republican Party — was conducting his weekly interview with the local superintendent when he started blasting the official for a pro-LGBT mural at a high school.

"Do you think that the Riverton High School should be promoting homosexuality?" Birbari asked Fremont County School District Superintendent Terry Snyder about the mural, which featured a rainbow flag and the phrase "love is love." The superintendent responded with a message of tolerance, but Birbari pressed on.

"You know there are certain diverse elements of individuals that are certainly fine,” the host said, “but the homosexual lifestyle has been demonstrated to be highly destructive.”

The Star-Tribune noted that Birbari claimed to have "scientific evidence" of the deviant nature of LGBT people, and refuted the superintendent's assertion that discriminating against "those classes" would be a civil rights violation by incorrectly claiming that gay, lesbian, bisexual and transgender individuals are not protected under the Civil Rights Act.

"John, well, you’ve portrayed your opinions, and I think maybe some dated opinions,” Snyder told the host. “I do know individuals that have a different sexual orientation. Hardworking, quality of life. They don’t all die because of AIDS, John."

“Not now,” Birbari said, reportedly cutting off the superintendent.

After his rant disparaging LGBT people, a representative for Wind River News Network told Wyofile.com that Birbari had been suspended "kind of" indefinitely, and that his views don't represent those of the company. The Star-Tribune's report noted that a Fremont County resident claimed he was back on the air the day after his interview with Snyder, but has since been off air.

You can listen to Birbari's rant below, via WyoFile: