Families reunited in 'Hugs Not Walls' event at US-Mexico border 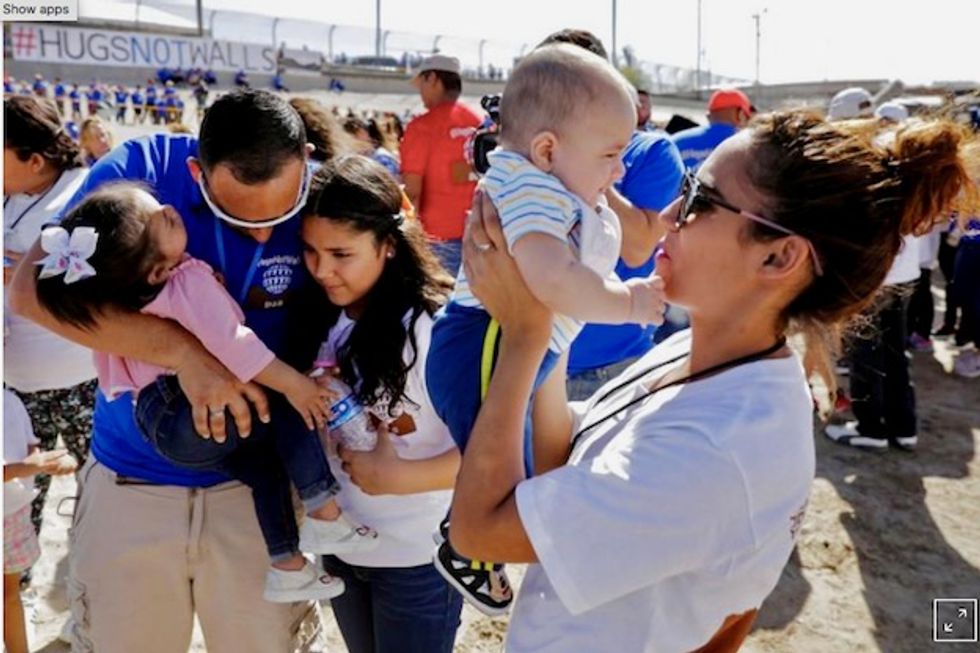 Marcelino Pizarro greets his daughter, Denisse, and for the first time granddaughter Aitana, as his daughter, Fatima Paola, holds her baby brother, Matias, during a greeting for family members from both sides of the border during the "Hugs not Walls" event on the border of Juarez, Mexico, and El Paso, Texas, U.S., May 12, 2018. REUTERS/Lucas Jackson

For three minutes on Saturday, Marcelino Pizarro hugged family members he had not seen since he jumped the fence into the United States from Mexico six years ago.

The undocumented migrant was at an event with hundreds of other families with mixed immigration status who were reunited with relatives in a “hugs not walls” meeting arranged by an El Paso, Texas-based advocacy group, Border Network for Human Rights.

Pizarro, 36, says he fled his homeland because of insecurity. He worked in a juvenile detention facility where he told Reuters he received death threats from inmates. A brother lost his life at the hands of an organized crime gang, he said.

Pizarro has five children, two of whom live with him in El Paso where he now works odd jobs. One of his sons suffers from autism. His other children, including his 18-year-old daughter Fatima Paola, live in Mexico.

“I would see my friends, my cousins, all with their dads and I would get sad and cry. I wish he could have been here as I grew up,” said Fatima Pizarro, who now has a daughter of her own, Aitana, who her father met for the first time on Saturday.

At the event on the border, Pizarro and more than 300 other families all donned blue shirts, while their counterparts from the Juarez, Mexico side wore white shirts to ensure no one tried to slip across. The brief reunions are approved by U.S. government agencies since participants stay on the riverbed that marks the frontier.

After speeches from the organizers, both sides rushed together for three minutes of tearful hugs, embraces and excited face-to-face conversations.

“I wouldn’t trade anything for these moments. We have to enjoy them as long as we can,” Pizarro said as he carried his granddaughter in his arms.

His brother, Ramon Pizarro, 51, took the opportunity to tell the family some news: he would use his job as a taxi driver to petition for a visiting visa and be able to see his brother more often.

With many other families waiting, organizers soon told them time was up, and they said their goodbyes, not knowing when they might meet again.

“The hardest part is that it’s over,” Pizarro said. “We have to accept it, but it’s hard.”