Fox & Friends: Bring back the draft -- even though Trump dodged it 5 times 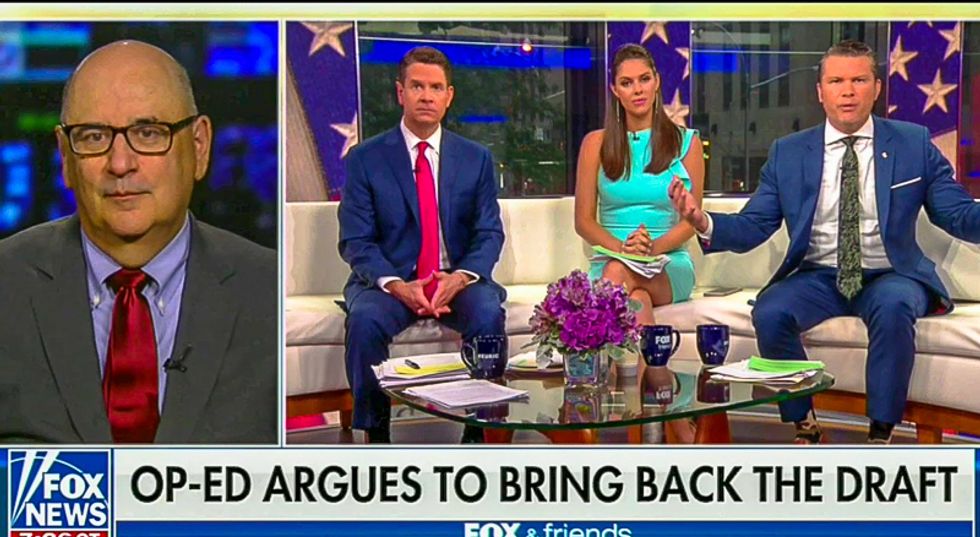 The hosts of Fox & Friends on Sunday agreed with New York Post columnist F.E. Buckley's assertion that Congress should reinstate the draft -- even though President Donald Trump was able to dodge the draft five times during the Vietnam war.

During a segment on the Fox morning show, Buckley observed that today's kids were not being taught morality in public schools. And he argued that a military draft would solve the problem because it is not controlled by the teachers' union.

"Public school used to be the most American thing about America," Buckley complained. "And you'd get out of public school learning some pretty good values. And now, the teaching core has completely abandoned that mission. Where you would find it would be in the military. So, I'm saying one extra year -- up to now it's age 16 -- add another year."

"It's a great idea," Fox & Friends co-host Griff Jenkins agreed. "But do you really believe -- with the culture of our public schools today -- that you're going to have these teachers, particularly in the latter year, encouraging their students to really get fired up to go serve their nation in the military in this culture?"

"No, and that's the point," Buckley replies "The teacher core would be opposed to that because it would teach love of America, it would teach personal responsibility, all the things they hate. So, yeah, all the more reason why we should do it. The only people I feel sorry for in all of this would be the draft instructors."

It was not immediately clear if President Donald Trump supports the idea that was floated by his favorite morning show. The president reportedly received five military deferments during the Vietnam War: four for college and one for a bone spur in his heel.

This comes as the FBI investigates Trump's possession of the documents, and whether it posed a threat to national security.