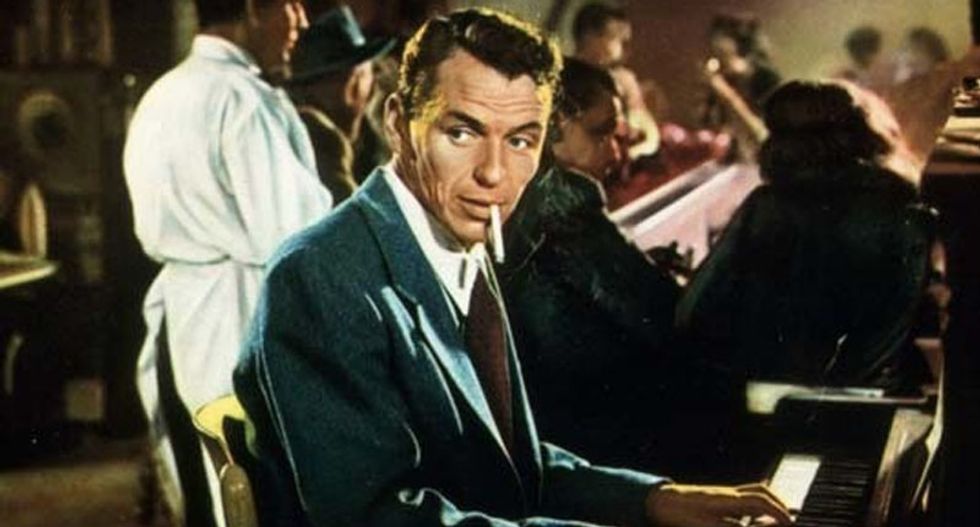 A still from Young at Heart, with Sinatra seated at the piano (Warner Bros)

Crooner, charmer and fighter: Frank Sinatra died 20 years ago, leaving an indelible mark on the world.

AFP draws on its archives to look over his exceptional life.

Over his lifetime, the elegant and clean-cut performer produced more than 100 records and dozens of hits such as "Strangers in the Night," "I've Got You Under My Skin" and "My Way."

His singing career saw highs but also lows, during which he turned to Hollywood, winning an Oscar in 1953 for the World War II army drama "From Here to Eternity."

On the stage into his late 70s, "The Voice" pulled in the crowds.

In 1962, at the height of the Elvis Presley craze, he caused a riot at Paris's legendary Olympia venue when fans rushed to see him on stage, turned out in "a night-blue suit with a red pocket handkerchief and a bow tie," according to an AFP report.

"At 11:30 pm organisers were still pushing back latecomers who were prepared to pay 5,000 old francs (today worth around 70 euros) for a stand-up place for the end of the performance," it says.

Renowned for his many romantic conquests, the dashing Sinatra was first married to teenage sweetheart Nancy Barbato (1939-1949), with whom he had his three children Nancy, Frank Jr and Tina. Then followed Hollywood stars Ava Gardner (1951-57) and Mia Farrow (1966-68), and model Barbara Marx (from 1976).

In 1965, as rumours swirled of his impending marriage to Farrow, the performer made a highly public return to New York with the actress, 30 years his junior, on board his luxury yacht and pursued by boatloads of journalists.

"The arrival of Sinatra and his beautiful 'siren' made the front pages of all the local dailies alongside large headlines announcing that an American fighter jet was shot down by a Soviet missile near Hanoi," AFP writes.

Sinatra was dogged by allegations of links with the mafia which he always denied, including in the courts, but was never able to shake completely.

In 1963 he was stripped of his casino licence on allegations of ties with Chicago mobster Salvatore "Momo" Giancana. At a 1981 gaming control board hearing on his request for a new licence, he was grilled about claims that he had delivered two million dollars in an attache case to mafia boss Lucky Luciano in Havana in 1947.

"'If you can find me an attache case that could hold $2 million, I'll give you the $2 million,' the singer replied," says an AFP story.

Sinatra won back his casino licence with the support of president Ronald Reagan.

Sinatra was also known for getting into scraps and fisticuffs.

In 1960 a security guard said he was punched up by the singer after he had been thrown out of an event. Just before, "Sinatra, who had been singing at a charity benefit banquet, had had a heated altercation with actor John Wayne and was escorted out in a very bad mood," the AFP account says.

"Paris is not Chicago and we don't want Mr Sinatra acting out his number of 'tough guy' or 'charming gangster' by taking journalists for targets," they fumed.

Sinatra died on May 14, 1998 in Los Angeles at the age of 82, after suffering a heart attack. New York's Empire State Building was lit up in blue in honour of "Ol' Blue Eyes."

His funeral was held in the only Catholic Church in Beverly Hills with leading lights such as Nancy Reagan, Kirk Douglas and Bruce Springsteen among the hundreds in attendance.

The church was "filled with gardenias, roses and white lillies, Frank Sinatra's preferred colour of the flower," AFP's piece describes.

The only one of his songs played in the church was "Put Your Dreams Away," the piece with which he habitually closed his concerts, it says.