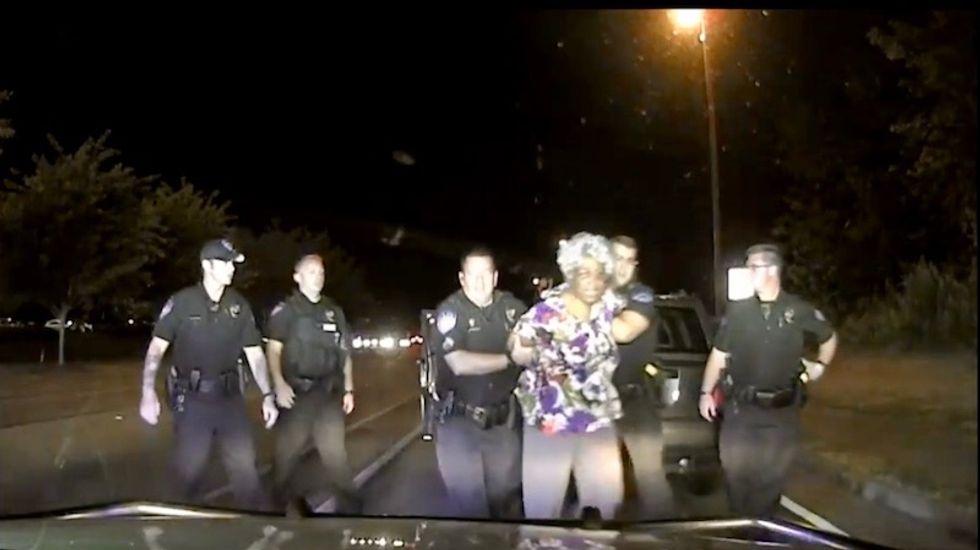 A Georgia cop has resigned after a video showed him mistreating a 65-year-old grandmother during a traffic stop, reports The Washington Post.

Dash-cam video showed officer James Legg behaving aggressively toward the woman, Rose Campbel, during a traffic stop in the Atlanta suburb of Alpharetta. As the other officers worked to yank the woman out of her vehicle, screamed curse words at her.

“Hey, you’re not in charge! Shut up and get the f*ck out of the car!” he yelled.

Legg's supervisor, Alpharetta City Police Chief John Robison, had suspended him and said he had “major concerns” about the incident and that Legg's behavior “simply do not represent who we are as an organization.”

Legg was not apologetic in his resignation, and said he was effective.

“I did what was necessary to complete the arrest by raising my voice and using verbal commands using heavy control talk with profanity... It worked instantly and she exited the vehicle immediately!” he bragged. “Maybe I should not have used profanity, but its immediate effectiveness is not questionable and I do believe I acted reasonably under the circumstances.”

Watch the arrest video below, with the chief's statement about the incident.

Living up to our Standards

On Friday evening, one of our officers made a traffic stop for a moving violation that escalated to an arrest of the driver. During the incident, another officer arrived and, as you’ll see from the dash camera video, did not perform in a manner that is reflective of who we are as an organization.

The stop was made on Windward Pkwy near GA400 when our officer observed the violator’s vehicle drift into another lane nearly causing a collision. The encounter began normally until the violator refused to sign the ticket being issued. After being told that she would be arrested for not signing the ticket, she requested that a supervisor respond to the scene. A supervisor was immediately notified per the request.

Why is it required to sign a ticket in Georgia? Technically, a ticket is an arrest that requires a bond. Officers are permitted, at their discretion, to release people on a signature bond for most traffic tickets, city ordinance violations, and certain state law charges. If the violator refuses to sign the ticket, they will be taken into custody and brought before a magistrate to pay a cash bond as a promise to appear in court.

While a situation may arise when someone is charged with an offense that they feel is unjust, a courtroom is the time and place to dispute the officer’s decision. It is there that the officer must prove their case to a judge and/or jury.

During this particular stop, you will see that the driver became so upset that she struck the officer with the door of her vehicle. She was then told that she was under arrest and, after she refused to obey the officer’s lawful order to step out of the vehicle, the officer attempted to physically remove her. As you’ll see, this was a complicated issue due to the age of the driver as the officer did not want to hurt her. Back-up was requested and available officers responded to the scene, some of which responded to handle traffic control along Windward Pkwy. One officer in particular; however, interjected himself into the situation using language and tactics that were inappropriate, even inflammatory. Again, this officer’s behavior does not reflect who we are as an organization and, because of this, we have initiated an Internal Affairs investigation. Our process allows us to thoroughly review the matter and determine what actions are appropriate moving forward.

Posted by Alpharetta Department of Public Safety on Thursday, May 10, 2018