What happens when you discover that your father lynched someone? 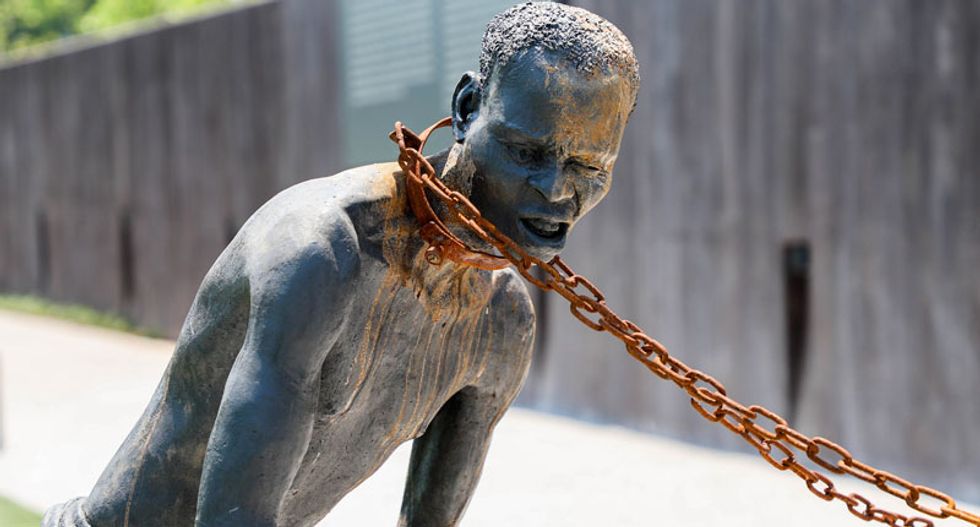 How do you feel when you discover that your father lynched people?

That is the question asked in Branden Jacobs-Jenkins’s play Appropriate at the Theater Gym of the Virginia Repertory Company in Richmond, Virginia. The members of the Lafayette family gather after their father’s death at his plantation in Arkansas to sell his home and the various artifacts they found there. In their rummaging, the family members came across a book of photos their dad took of various lynchings of African-Americans in the 1950s and 1960s in which he participated, along with jars of human remains.

They are shocked. Was their beloved father a member of a lynch mob? How could he have been one? After all, he was educated, sophisticated and at one point in his life even considered for a spot on the U.S. Supreme Court. How could someone that refined hang blacks? And, too, if he did, was that an indictment of them, too. Were they not descendants of a racist dog who rode around at night and murdered innocent people? Genes, right?

The family discussions, and arguments, about dear old dad begin right away and the children’s’ (men and women in their 40s and 50s) own racism flies out of the historical closet. One woman calls another a “kike.” They shout at a brother that a decade ago he was a pedophile, along with being a drug addict and alcoholic. None of them are as pure as they believed they were once they start talking about the lynchings.

What to do with the photo album? Bury it? Burn it? Or, as they all gleefully agree after some phone calls to photo experts, sell it for several hundred thousand dollars, using the money to pay off dad’s debts and line their own pockets? Can the money somehow wash away their dad’s role in a dastardly history of America?

These debates rage in the play, very neatly staged at the Virginia Repertory, 114 W. Broad Street, in Richmond. Director Anna Senechal Johnson does a fine job of presenting a family torn by its own turbulence and its knowledge that when they were kids, and before, their father was a racist who, with others, lynched numerous people just because they were African-Americans. She builds a crescendo of emotions in the play. As the acts go by, you begin to realize that an explosion is on its way. Ms. Johnson gets stellar performances by all of the actors in this play. Susan Sanford is the sister, “Toni” Lafayette, who took care of their father, and his estate, for years with no thanks from anyone. She is joined by Joe Pabst as brother Bo, who is at a crossroads in his professional life, Happy Mahaney as Frank, the drug addict/alcoholic/pedophile, Jill Bari Steinberg as Bo’s wife Rachael, Kathryn Humphries as Franks’ dizzy 23-year-old girlfriend River and others.

The overriding theme of the play, that educated people can be racists, too, not just rednecks, is pretty obvious from the start as is the idea that family members can, or cannot, wash away the sins of their fathers. Playwright Jacobs-Jenkins hits a raw nerve in many scenes of the play, though when he throws up the idea that we are all racists in some way. People in this play do not hate blacks, but they hate Jews. Rich people hate poor people. Poor people hate the rich. The list of American hatred goes on and on and its is all highlighted in this troubling drama about lynchings.

The Theater Gym, one of two theaters in the building, is a small theater and its seats are just a foot or so from the stage. You feel like you are in the middle of the action and the arguments swirl around you. The cluttered living room set, by designer Rich Mason, also makes you think you are back home in your own living room and the idea that may of us are racists seems realer. You are stunned when one of the kids’ runs not the room wearing Grandpa’s old KKK hood.

The play, which debuted in New York a few years ago, has one big problem, though – length. It runs over 2 1/2 hours and a good half hour could be cut. The playwright presents an idea, and then re-presents it eight times. The play needs to be trimmed. If its length is cut it will not only move along faster but pack a bigger emotional punch.

There is an intriguing racial story that surrounds the racial story on stage at this theater in Richmond. Two of the four theaters in the Virginia Repertory theater complex are housed at the November Theater, one of the nation’s most historic stages. It opened on Christmas Day, 1911, as the Empire Theater. The Empire, whose gorgeous interior was designed by Italian Ferruccio Legnaioli, was a stage theater from 1911 to 1914. Then it was converted into a movie house that, like all Virginia theaters, barred African-Americans. That changed a few years later when African- Americans were allowed – a first - but only allowed to sit in the balcony. That caused Virginia to change its laws to allow blacks in theaters, but in separate seating.

Decades later, in 1954, the founders of the Barksdale and Hanover Tavern theaters, now part of the Virginia rep complex, invited black professors and students at an all-black college to plays at the Hanover, on an integrated basis, sitting side by side with whites, booting aside the old Jim Crow laws and making racial history.

And now the Virginia Rep is presenting Appropriate, about a lynching. The play also takes place in the middle of the national debates over tearing down statues of Confederate heroes. That debate is centered in Richmond, where arguments take place over the towns’ numerous statues on historic Monument Avenue.

Personally, I have almost vomited in public twice. Once was when I walked through the Washington D.C. Holocaust Museum and into the room where hundreds of pairs of shoes that were taken from victims were piled up. The second time was at a photo exhibit of lynchings at the New York Historical Society. Those pictures, probably like the ones in the Lafayette photo album, did not just show African-American bodies suspended from tree limbs, but the joyous, jubilant, smiling faces of the perpetrators of the crime, who saw the lynchings as high entertainment to be applauded. Sick, just sick.

We should all dust off our family photo albums and take a look at our family’s past. Before you open the cover, though, brace yourself. You may not like what you find.

PRODUCTION: The play is produced by the Virginia Rep and the Cadence Theater Company. Set Design: Rich Mason, Costumes: Sarah Grady, Lighting: Michael Jarett, Sound: Jesse Senechal, Fight Choreography: Josh Chenard. The play is directed by Anna Senechal Johnson. Its run in Richmond has ended, but it will be staged around the country at future dates.